It's a great time of year. Spend the day at work, do Christmas shopping in the evening, then come home to watch some college football. On a weeknight! We actually have some intriguing games to watch, including one that's a whopper. So here are our previews for all of the week's games:

Tuesday - 8:00 PM - ESPN
Beef 'O' Brady's Bowl St. Petersburg Bowl - St. Petersburg, FL
Southern Miss Golden Eagles vs. Louisville Cardinals
Louisville actually beat UConn, and Syracuse. But they lost most of their other games. They were 3-6 against BCS teams. I think Southern Miss will take this game seriously, and prevail.

Wednesday - 8:00 PM - ESPN
MAACO Bowl Las Vegas - Las Vegas, NV
#19 Utah Utes vs. #10 Boise State Broncos
Not a bad pre-Christmas matchup. The Broncos will find their way to the Mountain West, where Utah will be their biggest competition. I'm rooting for the Utes, because I'm tired of the hype surrounding Boise State. Unfortunately, I think they're slightly more talented, and will win in a close, high scoring, and entertaining game. Thursday - 8:00 PM - ESPN
San Diego County Credit Union Poinsettia Bowl - San Diego, CA
Navy Midshipmen vs. San Diego State Aztecs
Both teams will be well-supported. SDSU, obviously, is playing close to home. But there are around 20,000 sailors stationed in San Diego. I'm going to go with Navy in this one.

Friday - 8:00 PM - ESPN
Sheraton Hawaii Bowl - Honolulu, HA
#24 Hawaii Warriors vs. Tulsa Golden Hurricane
Hawaii won 10 games. Of course, they played 13. They only lost once at home, and have the #1 passing game in the country. They throw for 387.8 yards per game, and scored 9th most in the country at 39.9 points per game. They're also 109th in rushing. Tulsa has a solid offense, but was ranked 84th in scoring defense. So I'll take Hawaii, and the over. More picks to come on Thursday. 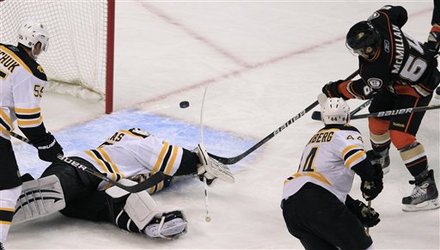 This game literally put me to sleep. Give soome credit to Jonas Hiller, who stopped 45 shots. But how many of those shots were any good? How many were aimed well? Have the Bruins ever seen this picture:

And if so, are they capable of hitting those targets, and at least forcing a goalie to do work to stop the puck?

This kind of close your eyes and shoot offense might be the best the Bruins can do, I'm afraid. Because so many of the forwards lack the puck skills to do anything else. Is it me, or do the Bruins seem to have the most trouble passing the puck without bouncing it over their teammates sticks? Concurrently, they also seem to have the most trouble handling a bouncing puck.

The guys who do have puck skills, typically lack the strength and physical presence to win battles.

I'd like to see the Bruins try to move their bodies around in their offensive cycling. That confuses the opponents, leads to missed assignments, and gets the goalie moving.

In the off-season, the Bruins' offense needs to be completely restructured and retooled. There's too many "playmaking" centers, and not enough play finishing wingers. Instead of trying to build 4 solid lines, the B's should try to assemble 2 very good lines. And they need forwards who can do multiple things, not just good passers, or good battlers, or fast skaters.

Both Bergeron and Recchi play the game the right way. However, they're both branch players. They're missing pieces to teams with strong cores. The Bruins do not have a strong core.

The B's have a few days off to sit in the corner and think about what they've done (1-3-1 in their last 5) before hosting Atlanta on Thursday.