BC and Notre Dame will now be rivals on the ice, not just the gridiron. The Fighting Irish have announced that they'll be leaving the CCHA and joining Hockey East starting in the 2013-14 season. Notre Dame will be the 11th member of the conference, joining BC, BU, UNH, Maine, Vermont, Northeastern, Merrimack, UMass, UMass-Lowell, and Providence.

This isn't much of a surprise, as Notre Dame's current home - the Central Collegiate Hockey Association - has been under siege since the Big Ten decided to form its own hockey conference. The Big Ten will take 3 teams from CCHA for the 2013-14 season.

Also in 2013-14, the new National Collegiate Hockey Conference will start play. This group took Miami (OH) from the CCHA. While the CCHA still had 7 teams remaining after the Big Ten and NCHA made their moves, Notre Dame was the only big program left. The Irish would have been playing against schools like Ferris State, Alaska, and Northern Michigan.

And with the influx of TV money (thanks to there being 100,000 channels these days), Notre Dame would have been left in the dust.

Now the Irish are part of an elite conference (Hockey East teams have 11 NCAA titles and 67 Frozen Four appearances), they'll be playing perennially ranked teams like BU, BC, and UNH. Hockey East already has a TV deal with NESN, and with CBS College Sports Network.

The move is good for Hockey East, as the Irish are an up and coming program. And obviously Notre Dame has a lot of fans all over the country. Even though South Bend is a long way from Orono, Maine, the Irish should be well-supported on their road trips. And of course, Notre Dame will help encourage more televised games. There's even a rumor that NBC (or one of its partners) will be interested in broadcasting Irish hockey.

I wouldn't be shocked if Hockey East went after a 12th team, or even more. ECAC schools like Union and RPI are candidates. And if UConn ever invested scholarships into its men's program, they'd be the most likely to join. UConn's women's team is already a Hockey East member.

But even with just 11 teams, Hockey East remains one of the premier leagues in a sport that is changing much like college football is changing.

That seemed like the shortest off-season in history. That's a good thing. The Bruins look to defend the Cup and become the first repeat winners since the Red Wings did it in 1997 and 1998. And they have most of the same pieces in place as they did last year.

Both goalies return, 5 of 6 defensemen are back, and so are 11 of 13 forwards. The Bruins lost Tomas Kaberle, Mark Rechhi, and Michael Ryder. They've brought in veteran defenseman Joe Corvo, and winger Benoit Pouliot.

The loss of Rechhi hurts. The Bergeron-Marchand-Rechhi line carried this team during a tough stretch in the regular season, then scored 22 goals in the postseason. Not only do the Bruins lose Rechhi's production, he made things so easy for Marchand. Peverley could fill-in and is a solid enough player to allow Bergeron and Marchand to make plays. But nobody can truly replace Mark Recchi.

The top line of Krejci-Lucic-Horton should be back to form. This line struggled with consistency, particularly from Horton. But they came through in the playoffs, especially Krejci. I've often criticized Krejci for not being a true #1 center because he's not a scorer. 12 goals in 25 playoff games shut me up.

Tyler Seguin showed sparks last year. Will those sparks ignite into a fire? I think that will take time to happen. He's talented, he's learning how to play defense, and he's learning how NHL players play defense against him. Seguin scored 11 goals last year and it's not out of the question that he score 20+ this year. The question is: which line does he play for? He's not consistent enough to be on the first line, but that's the level of talent he needs to be surrounded by. He's too talented to be on a grinding line. Maybe he could play with Marchand and Bergeron. But he has to earn that spot.

The true strength of this team is its defense and goaltending. And both of those should be as good as they were last year.

I was reading something about the Top 10 Stanley Cup contenders, and the fucking San Jose Sharks were listed as #1. The Bruins were third, behind the Penguins. ESPN.com canvassed their 8 experts and 6 of them picked the Sabres to win the Northeast. 1 picked the Canadiens. 1 picked the Bruins. Thank you, Scott Burnside.

Really? The Sharks? The Sabres? Did people not see what Zdeno Chara, Tim Thomas, and Dennis Seidenberg did to the NHL's best offensive players? Then again, none of those ESPN.com experts picked Thomas to win the Vezina this season, and none of them picked Chara to win the Norris.

18 players on the Stanley Cup Champions have returned, and this team isn't the favorite to win it all?

The Bruins return their best 5 defensemen, got rid of their worst, then added one who can not only score (which Kaberle had never been able to) but can play solid on defense. This is an elite group of blue-liners. And there's depth, too. Bartkowski and Kampfer, who were both solid when called upon last year, are waiting in the wings in case of injury.

Then there's the goalie. Tim Thomas is perhaps the most important player in the League to any team's success. He is 37 years old, but he looked healthier than ever last season. That being said, he played in 57 regular season games, plus 25 postseason games. He played about 4,900 minutes in net. 2,660 shots came his way. He's only had 16 weeks to recover from all this. 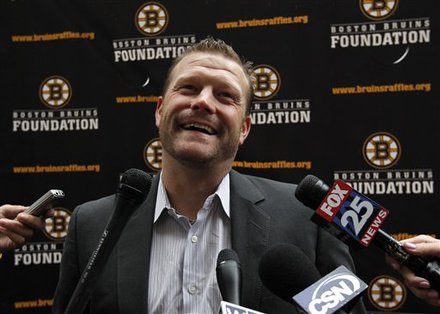 So this year, expect Rask to play a bigger part during the regular season. He started 27 games last year, expect just under 40 this year. It's not going to be a 1A/1B situation. Thomas is clearly the best goalie on this team. This will be an effort to keep Thomas fresh and frisky.

Stanley Cups aren't won on paper. This team is almost identical to the team that won it all last year. The Cup is won with execution and effort and that has to come out in the postseason. Regular season results are easy to predict, but the playoffs come down to a few plays here and there.

Buffalo is going to be tougher to beat. They added scorers to an already talented offense. And they have Ryan Miller.

Montreal is pretty much the same team. But remember, they played the Bruins the best in the playoffs.

The Leafs might be more respectable, but they're not a threat.

The Flyers dumped their offense and they're going to try to follow a model similar to the Bruins': Defensemen and goaltending. Pronger's great, but Bryzgalov is no Tim Thomas.

The Rangers are finally picking good talent, and they'll be strong. They have a goalie and goal-scorers.

The Lightning still allow too many goals.

The Penguins will always be contenders. And if they get Crosby back, they'll be serious contenders.

If the Capitals get stellar production from Ovechkin once more, their defense might be strong enough for them to do damage in the playoffs.

Out West, Nashville is just a few goal scorers away from being a Stanley Cup contender. Detroit is old but still deep.

San Jose has names. ESPN says they have "all the ingredients," but it takes more than correct ingredients to cook a good meal. And goalie Antti Niemi might have a ring, but he wasn't the big reason Chicago won that title.

And Vancouver... well, we know their weaknesses. My prediction for the season: Bruins win the Northeast with 110 points, are the #2 seed in the East, and let's be optimistic and say that they win another Cup.
Posted by rob at 10:00 AM No comments: