THE BRUINS LOST TO WHO? 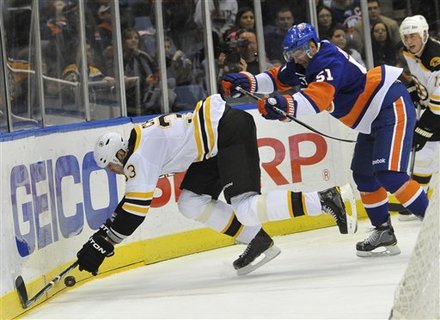 This is why during the Bruins' 6 game road winning streak, I was maybe the least excited B's fan in Boston. Not just because I'm a burnt out, soulless pessimist. But because this team has a history of moodiness. I wouldn't say their streaky. Streaky implies an ability to be somewhat consistent for prolonged stretches. The Bruins, however, fluctuate period by period, shift by shift. They have mood swings.

Scoring 2 goals often isn't enough to win. Unless you have a soon-to-be 2 time Vezina winner in net, an imposing defense, and are playing one of the worst teams in the League. You have to be able to go to places like Nassau, and win 2-0 or 2-1. So even though the Bruins need to score more goals, I'm more upset about the goals they allowed in this one.

The penalty kill has been steadily deteriorating. It was a late in the period power play goal that revived the Islanders. The PK has been confused by opponents who move bodies around, not just passing the puck to each other from fixed points (like the Bruins do on their power play). And in the past few weeks, they've been overly eager to trigger shorthanded breakaways, instead of simply smacking the puck down the ice for a clear. That's what happened Friday. Bergeron hesitated, failed to clear, and eventually the puck found the back of the net.

The PK unit has fallen to 18th in the NHL, killing 81.5% of penalties. That absolutely must turn around for the postseason, where special teams can decide a series.

The Islanders simply outworked the Bruins in the 3rd period. While the Islanders hustled to get to loose pucks, the Bruins looked lost, like they'd never played hockey before. A puck would find their stick, and they'd gently bat it 8 feet away in some random direction, allowing an Islander to scoop it up again.

The Bruins might start another hot streak. Maybe Bergeron and/or Marchand will catch fire again. Horton's been producing lately. But tha won't last. The B's might sail their way out of this storm, but what does that matter when the commander of the ship is a fool?

Right now, this team's chances of winning a Cup are 0%. At least while Julien's behind the bench.