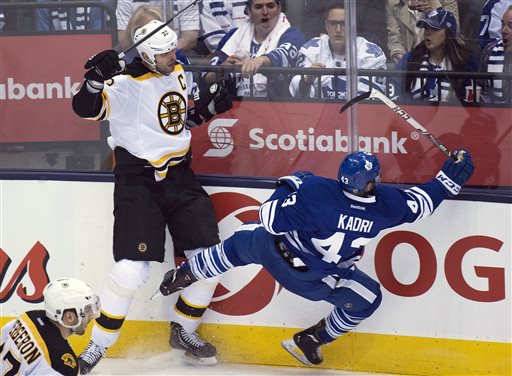 As a Bruins fan there was a lot to love about this game. With a side dish of stuff to hate. Let's start with the love and work our way to the hate.

The Krejci line looked like a #1 line. Lucic was skating hard, which led to physical play, which led to rhythm, which led to goals. Horton's goal in the 2nd was exactly the kind of play that line is capable of putting together. Krejci made a good play on a loose puck in the defensive zone, Lucic used his strength to drive the puck up the ice, and Horton used his hands to beat Reimer. The timing of the goal was perfect, just 50 seconds after Toronto made it a 2-1 game.

Patrice Bergeron had a very Bergeronian game, not standing out on the box score, but he stood out on the ice. He won 60% of his faceoffs. At desperate times in the defensive zone he moved back in front of the net and played as a 3rd defenseman.

Each line contributed something. The Krejci line generated 3 goals. The Bergeron line played great defense. The third line contributed with a goal created by Jagr and Peverley forechecking. And the fourth line played smart yet physical hockey in the 3rd, especially Thornton. Not to mention the shorthanded goal scored by Paille.

I could go down the whole Bruins roster and find something positive to say about every player. Except one. Tyler Seguin.

Seguin had a golden opportunity to score in the 1st. Actually, it was a platinum opportunity, encrusted in jewels and diamonds. And he didn't finish.

Seguin isn't a smasher. He's not a penalty killer. He's not a grinder. He's supposed to be a scorer. And he's not scoring. Only 16 goals and 32 points in the regular season (pace for 27 goals and 55 points in an 82 game season). Zero goals and zero assists in this series. Meanwhile Phil Kessel has 2 goals already. In the regular season Seguin usually does well against Toronto, and Kessel struggles against the Bruins. Three games into this series and their roles have been reversed.

In this series the Bruins have allowed 4 shorthanded goals already. That's inexcusable for what is supposed to be a strength of this team. The PK unit looks chaotic, disorganized, frantic. They're being too aggressive playing the puck-carrier. It's okay to give some space and allow shots when shorthanded. Let the goalie do his job and stop them. It's better to allow a predictable shot then over-commit to coverage and allow room for someone away from the puck to take a surprising shot.

Speaking of goaltending, Rask has, overall, been very good. He does have an annoying tendency, though, in those frantic and chaotic moments to over-commit himself. He gets a few yards away from the net then things get crazy in front. This type of melee was how Kessel scored in the 3rd. Tim Thomas was equally aggressive, venturing far from his net. But at his peak Thomas was much faster in recovering and getting back home. Rask goes out, leans away from the net, and takes an eternity to return. I'd prefer it if he stayed at home more, since it takes him so long to get back.

And the B's need to stop passing to empty space, unless it's a corner. That's a regular season thing to do. It's dangerous in the post-season because that space doesn't exist. Passing to space is essentially passing to the opposition.

The Bruins need to maintain the good habits we saw last night and limit the bad in Game 4, which is Wednesday night in Toronto.