It's that time of year again. The appetizer to March Madness' main course: Conference Tournaments...

Boston College fell short of securing a 1st round bye in the ACC tourney, although they do have a cupcake first round opponent in Virginia. Here are the games and my guaranteed to be wrong predictions...
ROUND 1:
#8 Virginia Tech vs. #9 Miami
Both these teams have something to prove to the Selection Committee. Virginia Tech beat Miami in OT during the regular season, but the Hokies have been ice cold since then, losing 6 of their last 7, and 8 of 11. Give this one to the Hurricanes.

#5 Clemson vs. #12 Georgia Tech
Clemson is ranked 18th in the country, and should demolish the Yellow Jackets, who were a dismal 2-14 in the ACC.

#7 Maryland vs. #10 NC State
Maryland was an NCAA bubble team until losing 4 of their last 6, but one of those 2 that they won was against NC State. The Terps might be playing with the illusion that they have a shot at the Dance, the Wolfpack would have to be blind to think that. Maryland wins this one.

ROUND 2:
#9 Miami vs. #1 North Carolina
UNC is the best team in the country. It's a fact. They'll be challenged by the national powerhouses in the NCAAs, but the ACC tournament is theirs to lose. They'll destroy Miami, who they beat twice in the regular season. 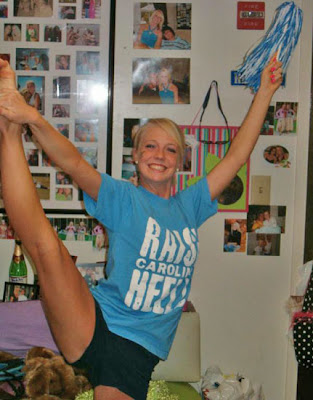 #5 Clemson vs. #4 Florida State
FSU has been a Jekyl & Hyde team this year. They beat Clemson twice, yet lost to Boston College and Northwestern. Despite sweeping the season series, I think the Seminoles lose to Clemson in a close game. But here's a picture of FSU alum Jenn Sterger anyway:

#7 Maryland vs. #2 Wake Forest
I'm feeling an upset here. Wake Forest is ranked 9th in the country, and they beat Maryland in their sole meeting. But that was a 65-63 contest. And if NC State, Georgia Tech, and Miami can upset the Demon Deacons, why not Maryland?

#6 Boston College vs. #3 Duke
BC can blame themselves for the 6 seed and a date with Duke instead of Florida State or a bye. Two losses to Miami, and a recent loss to NC State pushed the Eagles down to 6th in the ACC. Duke fell to BC in February, but this is March, the game is in Atlanta, and this is Duke. Blue Devils pull away after a closely fought game.

SEMIFINALS:
#5 Clemson vs. #1 North Carolina
The Tar Heels ripped Clemson apart 94-70 in January. The same sad story will be told in March.

#3 Duke vs. #7 Maryland
Maryland's miraculous run comes to an end here. Duke beat the Terps 85-44, then 78-67. That's a combined margin of victory of 52. Maryland will be lucky to score that many in this game.