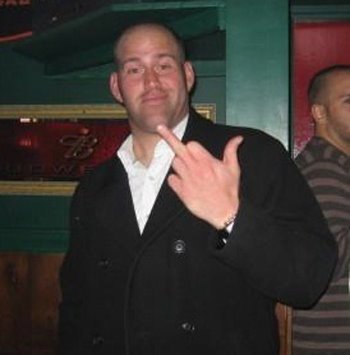 The Chicago White Sox didn't pick up the option on Kevin Youkilis, and I think this might be an opportunity for the Red Sox to pick up a talented and versatile corner infielder. If there weren't significant drama in the past.

On paper, signing Youkilis makes sense. The Red Sox, after trading Adrian Gonzalez, are in need of a first-baseman. And Youk is a Gold Glove first-baseman.

But there's some off-paper obstacles to Youkilis returning to Boston. While Bobby "physically or emotionally into the game as he has been in the past" Valentine is out of the organization, the GM who sent Youkilis to Chicago for Brent Lillibridge and Zach Stewart is still the GM. The owners who approved the deal still own the team. This organization shipped Youkilis to Chicago and not much has changed in said organization's structure.

The Red Sox could use Youkilis as a first-baseman, and a solid #6 hitter, but there might be too much water under the proverbial between Youkilis and the Red Sox for this to actually happen.

It's too bad. Because first-base is a glaring hole in the Red Sox roster going into 2013. A decent one is available on the open market, but he might be unattainable for the Red Sox.

Kevin Youkilis was one of the few likable players on this team, almost like a Kevin Garnett. I miss him.