It was a painful weekend for Boston sports fans, so let's go outside of Boston for a bit of college football talk.

Things are becoming clearer and clearer in college football. The BCS is still an unbelievable mess, and it's very possible that two undefeated teams will be left out of the title game. But the scenarios for conference titles aren't that complicated.

ACC:
#7 Georgia Tech has already clinched the Coastal Division, and will be heading to their 2nd ACC Championship Game. Clemson is in the driver's seat for the Atlantic title. They only need to beat 3-7 Virginia at home on Saturday to clinch. Even if they fail to do that, BC would need to beat both North Carolina and Maryland to get into the title game. Clemson and Georgia Tech played each other in September, with the Yellow Jackets surviving 30-27. This would be only the 2nd ACC Championship Game that didn't involve an ex-Big East team.

Big XII:
#3 Texas is in control of the South, and can clinch with a win on Saturday when they host 5-5 Kansas. Or if #15 Oklahoma State loses to Colorado. Texas would have to lose its final two games (to Kansas and Texas A&M) in order to not win the South. Oklahoma State would also have to run the table, beating Colorado and Oklahoma.

Nebraska leads the Northern Division with a 4-2 conference record, but Kansas State is 2nd at 4-3, and the teams play each other this Saturday in Lincoln. The winner of that game clinches the division.

Big East:
#5 Cincinnati and #8 Pittsburgh are both undefeated in conference play. They meet each other at Heinz Field on December 5th in what will be the equivalent of a Big East Championship game. Even if Pitt loses to West Virginia this week, a win against Cincinnati would give them the Big East crown.

Big Ten:
#9 Ohio State finally won a big game, beating Iowa in overtime. The Hawkeyes dropped two games in a row, forfeiting a Rose Bowl berth, and perhaps a National Title berth. The Buckeyes go to the Rose Bowl for the first time since 1997. That kind of surprised me when I looked it up.

Mountain West:
Not a BCS conference, but it's superior to the Pac-10. TCU's 55-28 win over #23 Utah gave them the keys to the kingdom. All they have to do is win at 5-5 Wyoming this Saturday (or win the week after when they host 0-10 New Mexico), and they'll win the Mountain West title. In order to not be Conference Champs, they'd have to lose BOTH their remaining games, and either #19 BYU or Utah (who play each other), would have to run the table. It's safe to start printing t-shirts and hats. Pac-10:
#18 USC is in 5th place. That's funny. #11 Oregon needs to run the table to secure the Rose Bowl berth. They play at Arizona on Saturday, then finish the season with the Civil War game against #19 Oregon State. But #17 Stanford is lurking. They hold the head-to-head tie-breaker against Oregon. Should the Ducks lose just one of their remaining games, and Stanford beat #25 California, then the Cardinal would go to the Rose Bowl for the first time since 2000.

SEC:
This is as clear cut as you get. #1 Florida clinched the East, #2 Alabama clinched the West. Both are undefeated, and it looks like the SEC title game will once again be a National Title Semifinal. Tuscaloosa is 203 miles from Atlanta. Gainesville is 331 miles away. 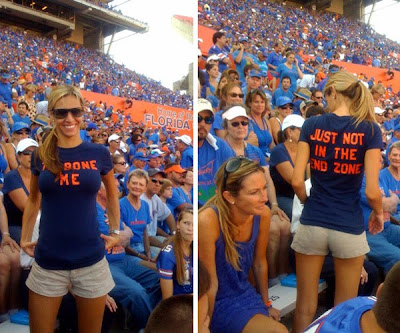