WHAT WE LEARNED IN COLLEGE FOOTBALL

The first week of the season is loaded with blowouts and aberrations. And for some reason, the slaughter of lowly I-AA opponents impresses voters and pundits. Here are some of the more meaningful lessons from Week 1:

1. PITT WAS OVERRATED, UTAH WAS UNDERRATED

I picked the Pitt/Utah game incorrectly, but in my Big East preview, I did mention that the Panthers have a great offense, but struggle to finish drives with touchdowns. That's what lead them into overtime with the Utes, and the rest was just Utah being better. The Mountain West should be thoroughly exciting this season, and Versus must be pissing their pants that they have a TV deal with that conference.

Although Denard Robinson had a Heismanesque day (1 passing TD, 1 rushing TD, 197 yards on the ground), it was still just one day. I'll give credit for Michigan crushing a legitimate team in UConn, but I'm hesitant to think they have a chance of being important down the stretch. 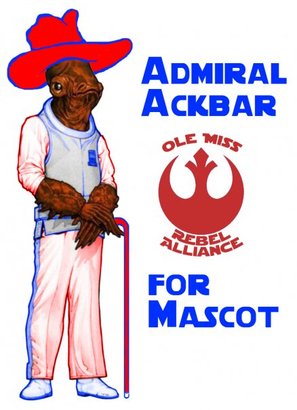 There's been a campaign in Oxford to make Admiral Ackbar the new mascot for the Ole Miss Rebels. What would he have to say about Ole Miss's game with Jacksonville State?

4. KANSAS SUCKS
If their former headcoach hadn't been morbidly obese, I don't think KU would have been as overrated as they were a few seasons ago. Well, reality is back in Lawrence, Kansas. Not only are the North Dakota Bisons a I-AA team. They're a crappy I-AA team. They won three games last year. So Kansas gets double shame for this one.

5. THE MOUNTAIN WEST WINNER SHOULD MAKE THE BCS
Utah upset Pitt. TCU beat Oregon State. And BYU beat Washington. Why is it that the winner of the Big East gets an automatic BCS berth, but not the winner of the Mountain West? It's bullshit.

6. THE BIG EAST WINNER SHOULDN'T MAKE THE BCS
4-4. That's how the Big East did in Week 1. Those wins came against Norfolk State, Coastal Carolina, Akron, and Stony Brook. The Big East was 1-4 against I-A teams.

You might not like the blue turf, or the incessant coverage/talk, but you should like Boise State. Not only are they fun to watch, they have the potential to truly bust the BCS system this year. After beating Tech last night, if they run the table, yet somehow aren't given a national title shot (maybe an undefeated Big XII team and a 1 loss SEC team get there instead, it's very possible), then maybe public outrage will be enough to change the current postseason format.