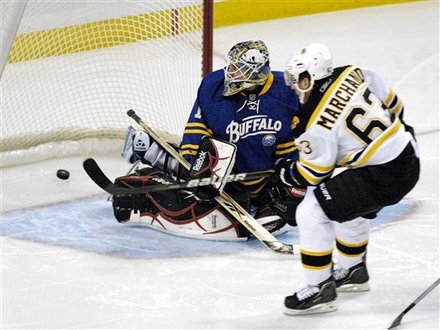 Buffalo came into this game with a 3-7-2 record, and without Ryan Miller. So a Bruins victory was in the cards. However, not in this fashion. The Bruins scored a pair of shorthanded goals as part of a 3-0 first period.

Usually, that means the Bruins will come out flat in the 2nd, but Michael Ryder quickly made it 4-0. At that point, the game was completely decided. The Sabres did break through Thomas, who allowed a season high 2 goals (that's fun to say).

5 goals from 5 players, 9 players had points.

Brad Marchand's goal was the first in his career.

Blake Wheeler finally scored a goal. He's consuming $2.2 million in cap space and is utterly useless. Speaking of which, it's time to trade Daniel Paille. Young forwards like Caron and Marchand play a much more dynamic game. Paille is an adequate penalty-killer, and that's it. He's a poor man's PJ Axelsson, as he doesn't do the little things that PJ once did. He's getting $1.075 to be a healthy scratch.

Lucic scored an empty-netter, his 5th goal of the season. He's healthy, and he's been playing the style of hockey he should be playing. He didn't score goal #5 until February last season.

It's still November. But it's hard not to get excited with a 7-0-0 goalie (best start for a Bruins goalie ever) whose GAA just skyrocketed to 0.72. The penalty-kill unit has scored almost as many goals as its allowed (2 scored, 3 allowed). Goals are coming from everyone. And you've already secured 5 road wins.

The Bruins enter a series of good test games. They're at Washington Friday night, then host the 6-1-2 Blues Saturday night. Then it's at Pittsburgh, then their first meeting with Montreal.