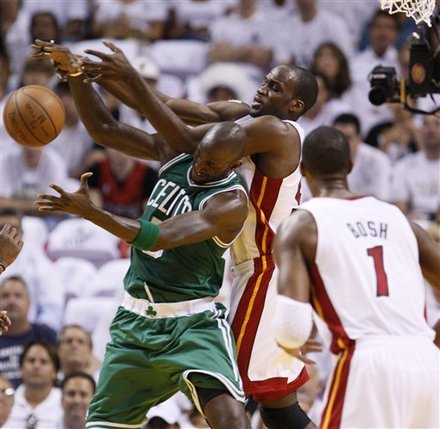 Around this time 4 years ago, Celtics fans were talking about lotteries. And now we're disappointed that we've only seen the C's win 1 title in 3 years. So let's not get too depressed about the possibilities of the Big Three breaking up. Let's not dwell on lost opportunities, or focus on the negative. In the last three years, this team went from a joke to a model franchise. They won 3 divisional titles, 2 Conference Championships, and 1 NBA Championship. They've become a face-franchise of the Association. They've rekindled old rivalries (Los Angeles) and established new ones (Miami, New York). This might be the end of an era for the Celtics. But it was one hell of an era.

Now to the game. You have to give credit to Miami. LeBron's been long criticized as a poor finisher. And before this series, I felt like if the Celtics could keep games close, their experience and clutchness would propel them to victory, just as it did in the Knicks series. However, the Heat were better in those late stages. Last night, while Ray Allen missed a three, and the C's turned the ball over with ease, LeBron, Wade, and James Jones were knocking down huge 3 point shots.

The Celtics turned the ball over 17 times. Garnett was 3 of 8 with his free throws. Glen Davis still can't find himself. Rondo played 30 minutes and most of those were ineffective. There was no singular reason for the Celtics losing. They lost for a number of reasons.

And without stellar 4th quarter performances from guys like Delonte West, it might have been over much sooner. West was the Celtics' best player in the 4th quarter. That's not a winning formula.

And at least LeBron's post-game interview was classy, and laced with praise for the Celtics. At the same time, he's still an annoying bitch, and I hope either the Bulls or Hawks destroy him in the next round.