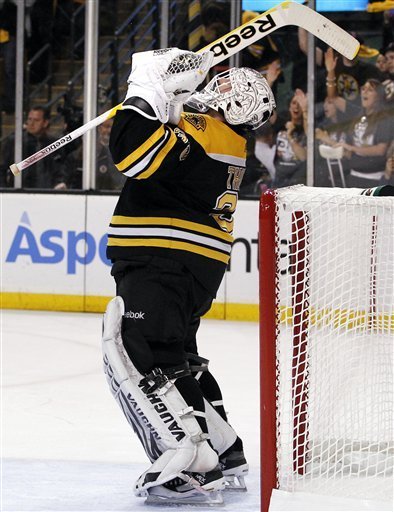 No need for anxiety. No need for panic. The Bruins took care of business Friday night and let all their fans relax a little bit.

A few weeks ago, I stressed the importance of improvement in the playoffs. From game to game, from series to series. And the reason the Bruins are in the Eastern Conference Finals for the first time since 1992 is because they've improved.

Remember those painful turnovers in Games 1 and 2 of the Canadiens series? Remember Marchand and Horton playing with the jitters?

The turnovers stopped. Marchand and Horton were the Bruins' best forwards in the Philly series. The Power Play actually scored a 5-on-4 goal (eventually). Chara's fully hydrated. And Lucic scored twice in Game 4, ending a long drought.

It was a sweep, but it wasn't utter domination. Thomas stole Game 2. Game 4 was a nail-biter until the late stages. And in those tight games, the Bruins showed some character. They fought the tough battles, won most of them, and that's why they are where they are.

And it's nice sweeping, not just because it's easy on the nerves. Thomas gets a few extra days to rest. Chara and Seidenberg will be worked like mules, and they could use some time to recuperate. Unfortunately, there's not enough time for Bergeron to recover from a concussion. That's a huge loss.

And against the Lightning, a defensive forward would have been nice to put on the ice against Stamkos. That will be an interesting series. Tampa Bay has some of the most talented forwards in the NHL. The Bruins have some of the best defensemen and the best goalie.

The series will start when the two Western series are decided.