IS HISTORY REPEATING ITSELF? 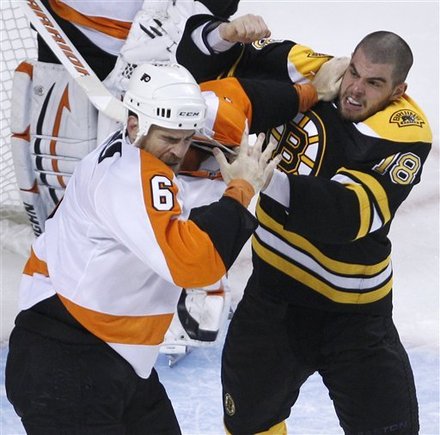 Well I won't sleep for the next 48 hours. Last year, the Bruins beat the Flyers 4-1 to take a 3-0 lead in the series. It was May 5th. And we know what followed.

However, last night we saw some of what makes the 2010-11 Bruins different from the 2009-10 team that choked so badly. Here are those differences:

#1 Tim Thomas:
Timmy has stopped 80 of the last 81 shots he's faced. He extended Game 2 for the Bruins, allowing them to win, even though they weren't the best team on the ice. Rask allowed 14 goals in the last 4 games of the series last year. He wasn't awful, though he wasn't that good. And he was nowhere near Tim Thomas' level.

#2 Health:
Last year, Seidenberg was out. So was Krejci. And Lucic was nursing an injury. This year, the Flyers are hurt much more. Without Pronger, they're a different team. I'd be shocked if Pronger doesn't play in Game 4, but how effective can he be? The Bruins have the good fortune of health at the moment.

#3 Marchand and Horton:
Horton has 2 goals and 3 assists in this series. Marchand has 2 goals and 2 assists. Last year, Marchand was a healthy scratch on the extended Bruins' playoff roster. Horton was golfing in Florida. This is the first postseason for both of them, and it doesn't show. 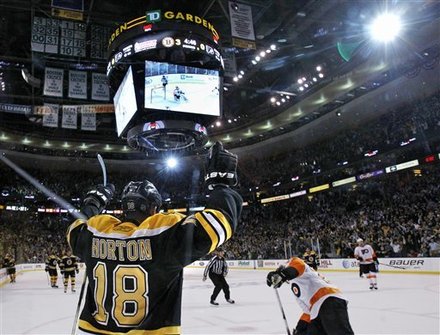 #4 Chara is Playing Like Chara
He's healthy. Whatever dehydrated him against Montreal has left his system. And so far, he looks much better than he did against the Flyers last year. His goal last night was classic Chara. Versteeg doesn't position himself right, Chara slips into the gap vacated, and fires a bullet over Boucher's shoulder.

But, we haven't seen the Flyers at their best yet. The 3-0 series lead is much closer than it suggests. One fortunate bounce for the Flyers on Monday and it's a 2-1 series lead. And at times on Saturday and last night, the Flyers looked listless and out of focus. Their 1st period last night was a joke.

History suggests that facing elimination, they'll bring their best effort. And we've yet to see how the Bruins will face serious adversity in this series. Rebounding from bad luck and bad games was what the B's failed to do last year.

And how will the Bruins deal with the inevitable pressure Philly will put on them. Last year, they relaxed. Will guys like Chara bungle a few plays? He did last year. It's up to the Bruins to execute, and truly put last year's collapse behind them.

Photo Credits:
AP Photo
Posted by rob at 9:30 AM