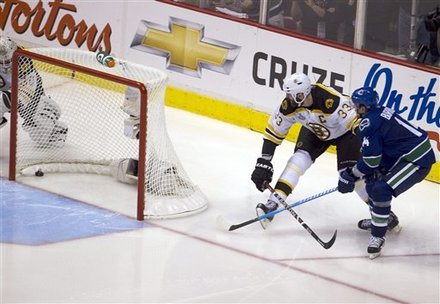 It's still annoying. I'll start my post with how I'll conclude my first set of thoughts. Alexandre Burrows was a major factor in all three Vancouver goals. After his bizarre biting incident in Game 1, he didn't deserve to be on the ice in Game 2. At the same time, he is a member of the Vancouver Canucks, and this series is between the Canucks and the Bruins. He and his team won Game 2 fair and square, even if I think his team should have been deprived of his services. But it's still annoying.

It's also aggravating to see guys like Maxim Lapierre getting cute by sticking their fingers in Bergeron's face. It's all a joke for the Canucks. And why not laugh? They're up 2-0.

And they deserve to be. As pissed as I am about Burrows' 3 point night, did the Bruins play their best game? Did they take care of the puck? Were they aggressive at the right times and careful at the right times? Nope.

Giveaways. Turnovers. Failing to get the puck deep into the zone. It's the same fundamental struggles that have been plaguing this team all year long. The Bruins are keeping themselves in these games, then pushing themselves out with these bush league mistakes.

Even when a giveaway doesn't lead to a goal, it's still extra time chasing the puck, it's still extra work for the defensemen. The Bruins rely on their defensemen not only to keep guys like the Sedins from scoring, but they're also a huge part of the offense. And if Chara and Seidenberg are gassed because David Krejci or Gregory Campbell makes a dumb pass in the neutral zone, you can't expect the big men to pinch from the point and contribute on offense.

But the defensemen are hardly innocent bystanders. They didn't take care of the puck either. In Game 1, an intercepted Boychuk pass led to Vancouver's late game-winner. In Game 2, Ference failed to clear the puck out of the zone, and Vancouver scored a Power Play goal. Then Chara was unable to find the puck, and Vancouver tied things up in the 3rd. And Burrows' OT goal came thanks to a Ference pass that went astray in the neutral zone.

The goal itself saw Thomas and Chara screw up. Thomas was too aggressive, Chara wasn't aggressive enough. Thomas should probably stay at home a bit more often, especially when there's traffic. It's a good way to get lost. All game, he was getting into hogpiles 5 feet from the crease and was bailed out by his teammates. 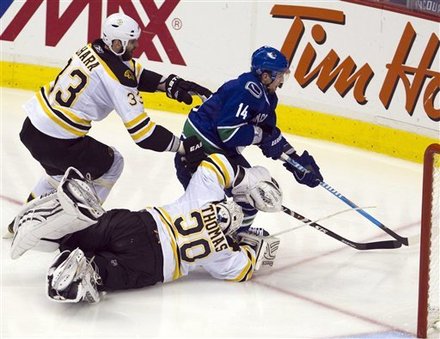 Chara had a mediocre game in general. He struggled to make plays to get the puck out of the zone. Most of the Bruins struggled with that.

Johnny Boychuk is looking more like Mark Stuart every game. He's playing a hard physical game, and screwing up on the fundamentals. The Bruins need him at his best as a defenseman, not just a hitter.

Michael Ryder had his strongest game since the outset of the Tampa series. If that continues, the Bruins' PP gets better, the 3rd line becomes a factor.

It's not a coincidence that when Chara moved back to the point on the Power Play (and Seguin was on the ice), the Bruins scored. Chara is infinitely useful on the point. His slapshot, his passing, his ability to sneak up to the dots, his wingspan preventing opponents from clearing, et cetera.

Lucic showed up in Game 2. He was physical, he was skating, he was strong. His rebound goal was the type of stuff he's done all year to reach 30 regular season goals. But guys like Horton, Bergeron, and Marchand need to score. Not only that, they need to shoot. These three scored the 2nd, 3rd, and 4th most goals for the Bruins this year. They combined for 3 shots on goal in Game 2.

Meanwhile, Krejci, Seidenberg, and Boychuk combined for 11 shots. These guys were 8th, 13th, and 17th in goals scored this year.

Horton had his worst game of the playoffs. His success against Montreal, Philly, and Tampa Bay helped carry the Bruins this far. They need him now more than ever. He registered 1 forgettable shot, and that was on a play that he should have passed to an open Lucic, who would've had half the net to shoot at.

These Bruins are so close. But with a 2-0 deficit, they need to take 4 of 5 from the best team in the NHL. They need to play as close to perfect as humanly possible. They need to execute the fundamentals, then take it from there. If they play their absolute best then lose, well that's life sometimes. But how they've lost Games 1 and 2 is inexcusable and embarrassing.

Game 3 tonight in Boston on Versus.