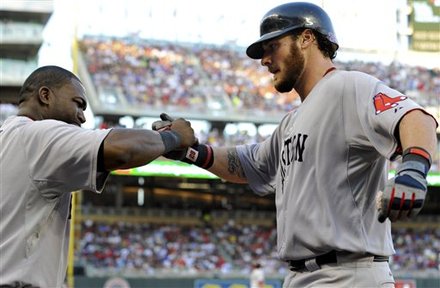 David Ortiz's 4 hits (including a homer and double) and 3 RBI propelled the Sox to victory last night. However, the game-winning run crossed the plate after Wakefield finished his outing, thwarting yet another bid for Wakefield's 200th career win.

Wake was, however, good enough to receive a 'W.' 7 innings, 3 earned runs, 5 runs total. He hasn't been great for the Sox this year, but his service has been invaluable, considering the alternative would be some AAA pitcher. Even though his ERA is 4.92, that's still pretty good for a 45 year old.

Another unsung hero of the season - Jarrod Saltalamacchia - had a good night. He hit a solo homerun (his 11th of the year), and an RBI double in the 9th. Guys such as him and Josh Reddick have kept the lineup solid from top to bottom. There are no easy innings for opposing pitchers.