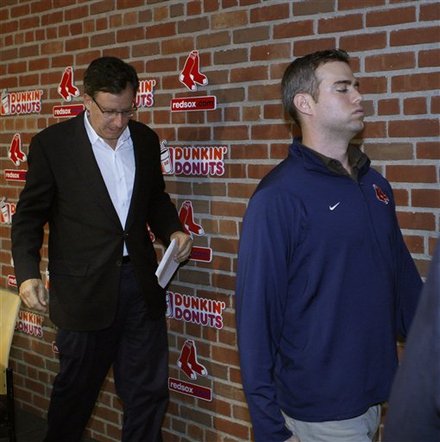 Reports are streaming across the internet that the Cubs have signed Theo Epstein to a 5 year deal worth $15 million. The rumor is that they'll name Epstein President. The Red Sox are likely to get prospects as compensation, as Epstein is still under contract through 2012.

Ummmmm, wow. I don't know who to be angry at right now. Is Theo jumping from a sinking ship, or does he feel like his welcome has run out in Boston? Is this him leaving on his own, or are the owners holding the door open for him?

He's certainly not secure in his job here in Boston. He has only one year remaining on his contract, and his bosses have been talking to the media about how one cannot be the Red Sox' GM forever. Which is never something one enjoys hearing their boss say.

This team is in dire straits. It needs pitching. Badly. It could use a decent outfielder too. A bench would help. And this team needs character. Theo is partly responsible for how badly this team has performed. His big-ticket acquisitions have often disappointed (Drew, Crawford, Matsuzaka, Lugo, Renteria, Crisp, Gagne, Clement). But he has helped revamp and restructure the farm system to make it productive (Pedroia, Ellsbury, Buchholz, Lester, Papelbon, Bard). He's also been good at finding undervalued talent that contributes surprisingly well (Ortiz, Mueller, Millar, Bellhorn, Loretta, Aceves, Cabrera). And not all of his big moves have been busts (Schilling, Foulke, Gonzalez).

So even though he's one of the reasons the Sox are where they are, I think he's the best guy to help the Sox improve. But now he seems to be gone.

And if he is leaving on his own accord, then I hate him. He's like the rich guy (Bruce Ismay) from Titanic who encouraged the Captain to go faster, then after the ship hit the iceberg, cowardly jumped into a lifeboat.

But I get the feeling like the owners haven't done enough to keep Epstein here. We haven't heard that they've offered an extension. They don't seem to mind that he's talking to the Cubs. And we're already seeing stories about how great Ben Cherington is.

Cherington is responsible for developing talent through the farm system, so he's obviously done well for himself. But the solutions to the current Sox mess won't come from Pawtucket. There are overpaid, overfed, overdrunk starters. The bullpen has two reliable arms, maybe three. Theo's successor will be walking into a storm of difficulties that need to be resolved ASAP. Meanwhile the owners might not be too keen on dishing out more money to fix the problems caused by high-priced free agents. Especially after spending $95 million buying players for Liverpool this summer.

Maybe this will all work out in the end. But the way I see it, the Sox have bad pitching, detestable players, and they've lost the first manager and GM to win them World Series since the end of World War I. Right now, it sucks to be a Red Sox fan.
Posted by rob at 11:20 AM