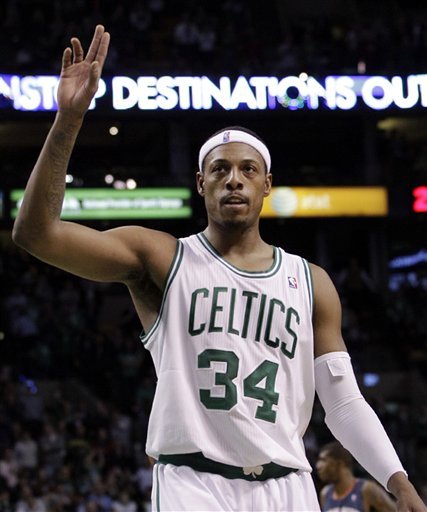 I'm not the biggest basketball fan in the world. But right now I'll grab hold of any positive Boston sports story that I can and hang on for dear life.

Paul Pierce scored 15 points last night in the Celtics' 94-84 win over the lowly Charlotte Bobcats. By doing so, he surpasses Larry Bird as the Celtics' 2nd highest scorer ever. Pierce has now scored 21,797 points in Boston. John Havlicek is the team's highest scorer with 26,395.

Not only was this game a reminder of Paul Pierce's importance to one of the most storied franchises in American sports, but it's made extra special by the current nature of the NBA. Players change teams with the drop of a hat. Free agency, the salary cap, and players wanting to play with their buddies means that stars change jerseys more than Oregon's football team.

Pierce is sort of a throwback. Drafted by the Celtics, he's been a constant presence since 1998. He was a Celtic when the Celtics were a joke. He was the key part of their Eastern Conference playoff run in 2002. He was still there when C's fans were praying for a lottery pick in 2007. He was at the podium a few months later when Ray Allen and Kevin Garnett were acquired. And of course he won a ring in 2008. As the Celtics' fortunes have risen and fallen, Pierce has been a constant presence.