Maple Syrup vs. Salsa, Canada and Mexico Brawl at WBC 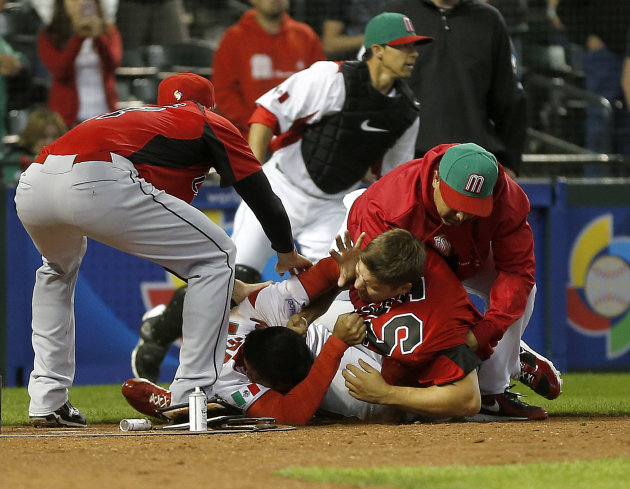 Canada was up 9-3 when a Canadian bunted for a single. Normally this would be against an unwritten rule, but run differential is a tie-breaker in this tournament, so it's not clearly black and white in this instance.

A Mexican pitcher repeatedly threw at the next Canadian batter, eventually hitting him in the back.

The Canadian batter walked toward the mound, the benches emptied, a melee ensued. A melee which involved Red Sox reliever Alfredo Aceves.

The bunt single, even with that run differential tie-breaker, is still a douchebag move. And maybe in the next WBC, they can modify that tie-breaker so the most positive run differential a team can have in a single game is 5. So if a team is up by 10 runs or 20 runs, they still get credit for +5 and no more. That way teams up by 7 or 8 runs won't continue to pile on in the 9th.

No need to throw at the next Canadian batter. It's an exhibition tournament, Mexico was essentially eliminated. It was just a childish reaction to a meaningless bunt.

Baseball hitters have become unbelievable babies. They get hit in the back or the butt, then act like the pitcher just threw a baseball at their mother's face. Over the last few decades batters have become insufferable whiners when pitchers throw inside. This Canadian got hit in the back, not the head, not the wrists, and wasn't at all injured. And he turns it into a brawl.

There's a prevailing attitude that if a batter is hit, he has the right to charge the mound. And that's bullshit.

And Canada, if run differential was so important to you, wouldn't you take the free base from the HBP? Wouldn't that please you? It would help precious your tie-breaker!

As the fracas simmered, a Canadian coach got a full water bottle thrown at him (that's why many sports venues don't give you bottles with caps on them), and then Canadian short-stop Cale Iorg threw it back into the crowd, which is an extremely stupid thing to do. How do you guarantee you hit the right person? Did Iorg even know who he was throwing at?

The PA system implored the crowd to calm down, making announcements in English and Spanish. I'm surprised no Quebecois have complained that announcements weren't also made in French.

This kind of douchebaggery reminds me of the Canadian National Hockey Team. I wouldn't call them dirty, but they push rules as far as they'll bend. They act like jerks, then whine and complain when other teams push them back a bit or when things don't go their way. Canadians are typically very nice, considerate people. Until they're playing a sport and then they turn into pricks.

I'm going to start calling Canadians who participate in this kind of misbehavior Eh-holes.