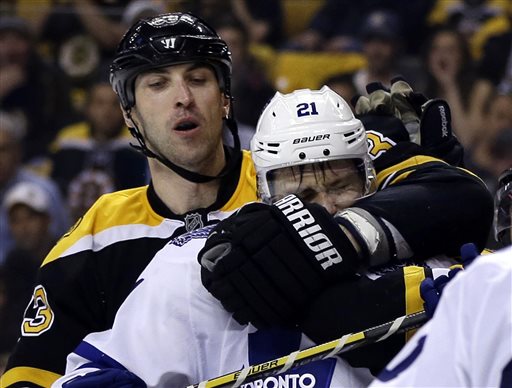 In all our worry about how the Bruins would play in this series, I think we all forgot an important fact: James Reimer is a 25-year old with no playoff experience. And he was solid, at best, in the regular season. He was an absolute sieve last night. More holes than a mini-golf course.

On the other end of the ice, Tuukka Rask was a key to this big win. He only had to make 19 saves, but in the 1st period he made timely saves. Shortly after he made a big save, the Bruins took the lead. If Toronto scores that shorthanded goal, who knows what happens to the momentum and flow of the game.

The B's pressured a mediocre goalie. And when they took a lead they didn't make the kind of defensive miscues and turnovers that would allow Toronto to easily make a comeback.

There was some nastiness toward the end of this game. I think Toronto will be very motivated in Game 2. It's important for the Bruins to start strong in that game. Consistency has been an issue with this team all season long, from shift to shift, period to period, game to game. The Leafs will be hungry, the Bruins can't give them any easy snacks.

And who would have thought that Wade Redden would be the Second Star in a playoff game? That's the type of unexpected playoff performance that can make the difference between winning and losing a series.