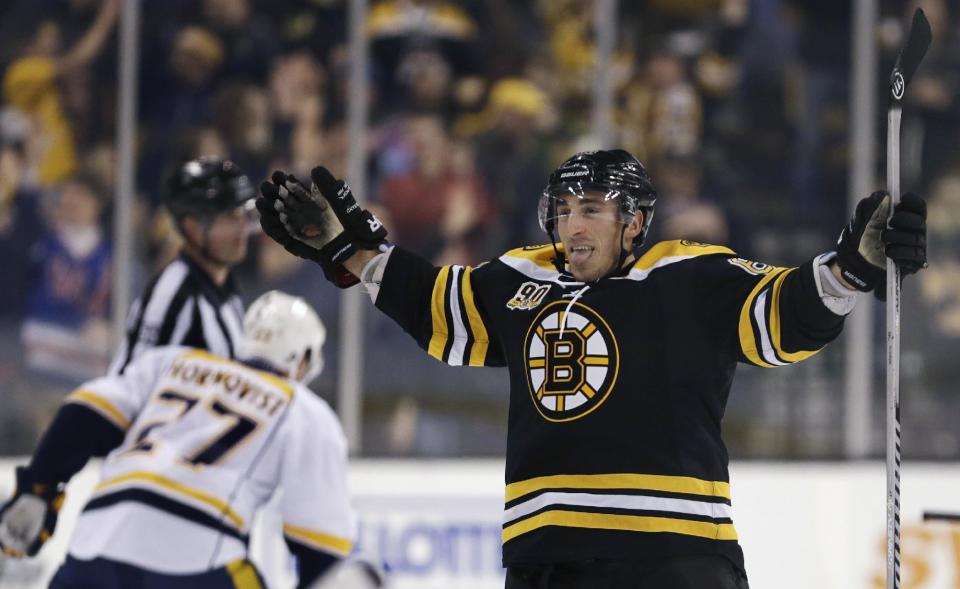 The Bruins are in the middle of two things: a bad rash of injuries, and a relatively easy part of their schedule. So when the last place Nashville Predators come to town, even if half your roster feels more at home in Providence, you still have to take advantage.

Just like last night's snowstorm, the Bruins started slow then poured it on stronger and stronger as the night went on. Johnny Boychuk fired a patented rocket past Mazanec in the 3rd. Then Jarome Iginla drove to the net like Shaq, outmuscling a defender for position on his way to his 13th goal of the season. And in overtime Brad Marchand self-pased the puck between the defensemen's legs to give himself space to score the game-winner.

Niklas Svedberg started in goal for the B's. This was his first career NHL game. He played solidly. Nashville isn't much of a test (5th fewest goals scored coming into last night's game). The Bruins need a backup goalie who can be put into the lineup often enough to keep Tuukka Rask fresh. And the Bruins need to at least have a chance to win those games. Maybe Svedberg can give them that chance in the future. Not right now though, since he's already been sent down to Providence.

The Bruins host the Winnipeg Jets on Saturday afternoon. That's another bad team that the B's need to collect points against. Then the Bruins go on the road and play the top 3 teams in the Pacific division (Anaheim, LA, San Jose).