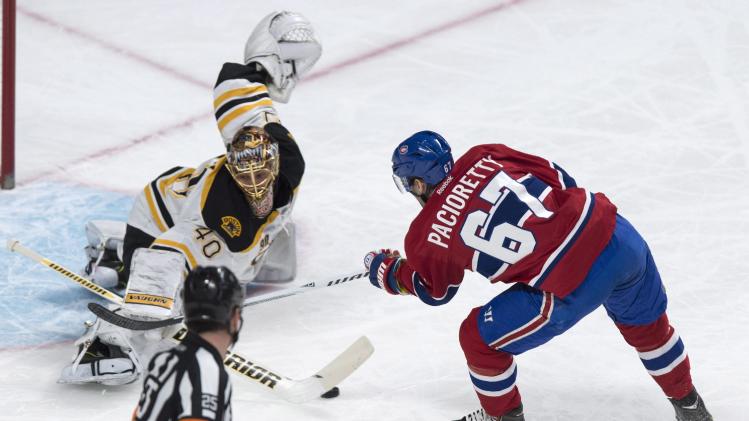 When the Montreal Canadiens traded for Thomas Vanek, it made me worry. The Habs have been a tough match-up for the Bruins for years, then they added someone who has specialized in scoring against the B's. However, last night Vanek was not a factor on offense at all. In fact, a defensive lapse of his allowed Zdeno Chara to score early in the 3rd period, which made it a 4-0 game and essentially cemented the Bruins' win.

Tuukka Rask was named the first star, and he deserved it. The Bruins didn't have a great 1st period, but Rask did. And Rask was also the best penalty killer. He was the biggest reason the B's killed all 3 Montreal power plays. He also made a huge pad save against a Max Pacioretty breakaway in the 1st. He kept the game 0-0 when the Bruins weren't playing their best.

This was also a good time to play Montreal. Carey Price is still out. And their power play is mired in a deep slump. The Habs entered this game 1 for their last 18 power plays.

The Bruins did their job. I mentioned Rask. He carried the Bruins through the 1st. Then Carl Soderberg scored early in the 2nd, almost as a response to how well Rask played in the 1st. Soderberg is the type of guy who could score a goal or two in a playoff series, and those goals will be the difference between winning and losing the whole series. He's not always changing the game, but he has the capacity to change it.

Milan Lucic scored his 20th goal of the season in this game. Like many of his goals, it was the end result of his entire line playing well. And that's not a criticism of him. It's a compliment. He makes his linemates better just like they make him better. This has been the most consistent regular season of his career. That's a credit to him and to his line.

The Bruins are playing great. That's six straight wins. They've gone past 90 points. They host the Phoenix Coyotes tonight. That's another team that's hot. The Coyotes have won 4 of their last 5. And they've been waiting in Boston to play the Bruins. This is a great test tonight.