Pablo "Panda" Sandoval thinking with his bamboo stick during game 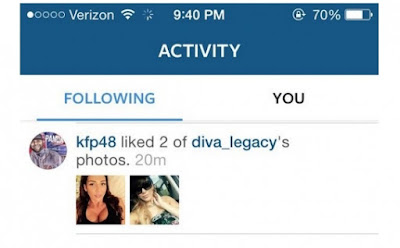 If Pablo Sandoval and this Atlanta Instagram girl hook up, and it's the 200th girl he's banged on the road, will he keep the condom wrapper or some other memento, and put it next to his 200th double ball?

When the Red Sox acquired Pablo Sandoval, I didn't love the move, didn't hate it. His regular season numbers weren't impressive (hadn't hit 20 HRs, had a .350+ OBP, or a .450+ SLG since 2011) so the Red Sox PR machine focused on his post-season stats. He was slow and his fielding was shaky, so the Sox focused on his "panda" nickname and jolly attitude. The Sox acted like they'd signed a great player, and they paid him like a great player, when in fact he was just a good player.

And now it seems as though he was looking through his Instagram during Wednesday's loss to the Braves, and liking some provocative pictures posted by a young woman in the Atlanta area. At least that's what Barstool Sports discovered.

I could understand if a girl had messaged him on social media and he responded. Why should he wait until after he and his teammates lose again in order to arrange some post-game plans? But this is him opening an app, finding the pictures, and liking them. These are the actions of a disinterested man. These are the actions of someone LOOKING for something to distract him.

It's a reflection of Pablo Sandoval being disinterested in the team, but it's also evidence that the team itself is something not worth interest. They're out of contention before summer officially starts. They lost after being up 8-1. The manager has no idea how to manage a pitching staff, and coddles his starters even after they throw temper tantrums in public.

I can understand Pablo Sandoval's disinterest, but I still don't like it. When I'm at work, even if I'm bored, I don't go through my phone looking for something to distract me unless I'm on my break, or on the john. If someone messages me, I'll answer. But when I'm working, I'm working.

I never liked Pablo Sandoval, but now I officially dislike him. Checking Instagram is just the visible tip of a much larger ice berg of his actively seeking distractions. I also didn't like how he demanded the ball for his 200th double the other night. Who the hell cares about 200 doubles? Sandoval isn't even in the top 1,000 all-time in doubles.

Sandoval is in danger of becoming the face of the unlikable 2015 Red Sox. He's already a disappointment as a hitter. He's already overpaid. He already sucks in the field. He cares more about 200 doubles than his team losing. And he'd rather look for pictures of local girls on Instagram than watch his teammates play.

Overrated, overpaid, under-performing, selfish, carefree, undisciplined. Sounds like the 2015 Red Sox to me.