It's funny, the build-up to the Colts game was about 100 times the intensity as it's been for this game against the Saints. Perhaps Thanksgiving got in the way. And the Colts game did have more playoff implications (playoff scenarios are the one of the few times we use the word "implications"). But the Saints are by fary the best team in the NFL through 10 weeks.

The Colts are 10-0, and that's nice, but beating up on the AFC South, then taking advantage of Laurence Maroney's point-shaving don't impress me much (bonus points for Shania Twain reference).

The NFL shouldn't have traditional power rankings this season. It's more like a pyramid. And the Saints are at that pointy pinnacle atop the pyramid.

Why are the Saints so much better than everyone else? Balance on offense. They can run the ball (5th most yards in the NFL), and pass the ball (9th most). They've scored a League high 369 points, or 36.9 a game. That's a touchdown more per game than the 2nd highest scoring team.

Their defense isn't amazing, and that's the advantage the Patriots must press home. No more red zone failures. The Saints are 15th in scoring defense, allowing 20.4 points per game. And that's still good, but the Patriots shouldn't have problems marching downfield, then putting the ball into the end zone. 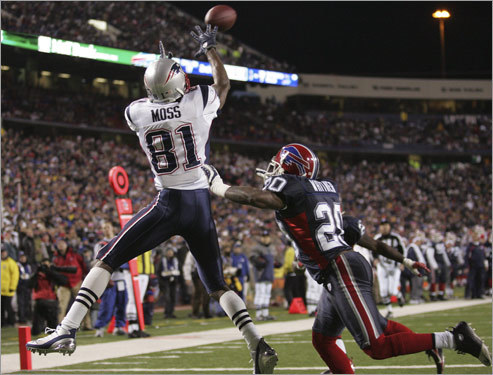 Did you know the Patriots have the 2nd best scoring defense in the NFL? I didn't until just now. 16.4 points per game. So perhaps it isn't just the Patriots offense that will be tested. The Saints are up against a statistically elite defensive unit.

The key to winning this game will be Brady, Moss, Welker, and unfortunately Maroney. The usual suspects on offense have to be able to score on demand, or at least mount lengthy drives. We saw how exhausted the Pats' defense got in the 4th against Indy. This cannot be repeated. The Pats no longer have the depth to shift defensive linemen and linebackers in and out to keep them fresh.

The Saints are 20th in rushing defense. What compounds this potential chink in the armor is that a 10-0 team is usually in the lead, which means other teams tend not to run the ball. Yet they still allow 115.7 yards per game.

The Patriots need to have a steady rushing attack. It doesn't have to be game-breaking, just sure and steady, 3 yards every time. They can't afford Maroney's token 1 yard losses. This will set-up play-action, wear out the Saints' D-line, and keep Drew Brees on the sidelines. Laurence Maroney CAN do this, but often doesn't. Hopefully BJG Ellis will.

I think the Patriots will come through in this one, and by a surprising margin. Patriots 31, Saints 21.