Time to pick the New Year's Eve Bowls, and there are some tantalizing ones on the menu. All these games are on Thursday 12/31.

12:00PM - ESPN
Armed Forces Bowl - Fort Worth, TX
Houston Cougars vs. Air Force Falcons
Good C-USA/MWC match-up here. Houston has the shorter trip, but there are plenty of Air Force people in Texas who will come out in support of AFA. Houston's put up 29+ in every single game, including a win over Texas Tech. They also beat #19 Oklahoma State in Stillwater. Still, they lost to ECU. Air Force is a solid mid-pack Mountain West team, but Houston's too much for them. 2:00PM - CBS
Brut Sun Bowl - El Paso, TX
Oklahoma Sooners vs. #21 Stanford Cardinal
I think everyone outside of Pasadena and Berkeley have been Stanford fans this season. The Cardinal is one of only 2 teams that beat Pac-10 Champ Oregon. Oklahoma will have more fans with the game in West Texas, and I think this will be an exciting contest. But I'm going with OU to win.

3:30PM - ESPN
Texas Bowl - Houston, TX
Navy Midshipmen vs. Missouri Tigers
The Tigers are part of a dreadful Big XII North that was nothing short of a joke. I think Navy sails away with this one.

6:00PM - NFL Network
Insight Bowl - Tempe, AZ
Minnesota Golden Gophers vs. Iowa State Cyclones
Both teams boast 6-6 records, so the game should at least be a close one. ISU feasted on North Dakota State, Army, and Kent State to get their 6 wins. Minnesota had South Dakota State and Syracuse. ISU sucks on toast, Minnesota is just kind of bad. Minnesota wins.

7:30PM - ESPN
Chick-fil-A Bowl - Atlanta, GA
#11 Virginia Tech Hokies vs. Tennessee Volunteers
Complete mismatch. Then again, the ACC has struggled against the SEC this season. But Va-Tech never plays at the same level as the ACC. I think this game is a blowout in favor of the Hokies. 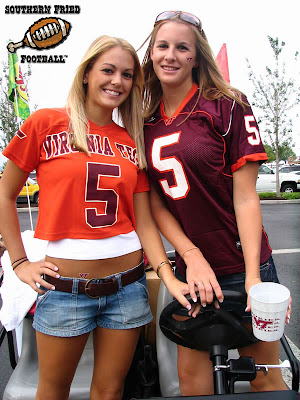