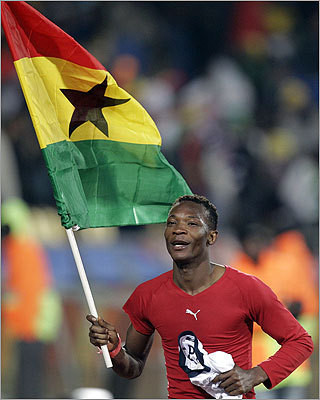 Ghana is not an inherently superior side than the US. On paper, I'd give the US a slight edge. These are two teams in the same class. So when they meet, it comes down to how well they execute and use their talents. And you'd think with the considerable experience the US Team has, they wouldn't come out as nervy as they did.

Ghana's first goal was inexcusable. For some reason, Ricardo Clark started in midfield. It was Clark who was partially to blame for England's goal in the group stage. Then against Ghana, he's got the ball around midfield, and decides he'll take on the Ghanaian player head-on. This is an 11 vs 11 game, it's at the halfway mark on the field, and this fucking clown decides to be a hero. And in the 1 out of 5 times he beats the guy, does he think he's going to score a 40 meter goal?

Clark, predictably, loses the ball, and this triggers Ghana's impressive counterattack. The defenders and Howard could have done more, but it started with Clark's arrogance. Thankfully, coach Bob Bradley was willing to own up to mistake, and pull Clark after 30 minutes.

Donovan and Dempsey exploded in the 2nd. Their aggressive and composed play earned a penalty, with Donovan getting fouled in the box, and Donovan bouncing it in off the post.

But Ghana settled down, and the US lost its desperate edge. Go into extra time, and a defensive lapse gives Ghana the winning goal.

Then comes a string of countless opportunities that aren't finished. This wasn't bad luck! And the commentators on ESPN need to realize that if you miss the goal, it's a missed shot, not an unlucky shot. Jozy Altidore was crap. A purely turd performance. And an unjustly selfish one at that. Robbie Findlay was also a disappointment at the end. There was no cooperation between the strikers.

We're chokers. Sorry folks, it's true. It's one thing to lose to Brazil or Spain. Losing to Ghana in '06, and in '10 is inexcusable. And allowing all these early goals in a tournament is equally abhorrent. Do you know how long the US played with a lead in this World Cup? About 2 minutes.

The US team is better than that.