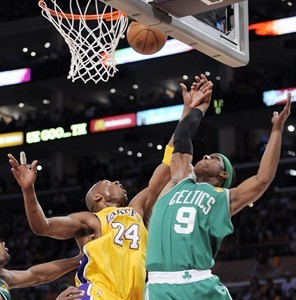 Well after beating Dwyane Wade, LeBron James, and Dwight Howard, it was hard to doubt the Celtics. They'd vanquished the 1st and 2nd best record teams in the Association, and did so with relative ease. But let's give LA some credit. The "teams" the Celtics had eliminated were centered around individuals. But the Lakers are a team, a pretty good team at that.

The one thing the Celtics did better was shoot free throws. That's it.

Now, I don't think LA will shoot this good for the rest of the series. Nor do I think the Celtics will continue shoot so poorly, especially from beyond the arc. Is Ray Allen a 3 for 8 shooter? No!

That being said, the Celtics do need to do something about the Lakers' 2nd chance points. LA got too many offensive rebounds, then were allowed to put the ball in the hole, far too easily.

Rasheed Wallace, sometimes I doubt your commitment to Sparkle Motion.

The list of problems needing to be addressed isn't short. The Celtics have some issues to work out. But they have time. They'll improve for Game 2. And it'll be hard for LA to duplicate their Game 1 performance.

And I hope Jack Nicholson chokes on a hot-dog. Does this guy seriously deserve his own camera? Yeah, he wears sunglasses at a basketball game. Wicked cool, guy.