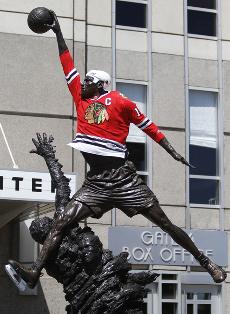 The difference was goaltending. Leighton was good, not great. Niemi was stellar. He carried the Blackhawks in the 3rd period, as Philly bombarded him with shots from all angles. But to be honest, Chicago should be worried. Maybe not worried. Concerned. They looked a lot like the Bruins in that 3rd period. Hesitant, cautious, careful. It's one thing to be conservative, it's another to be so scared to make a bad pass that you keep the puck in a bad spot, allowing your opponent to force a turnover and breakaway up ice.

But I'll give credit to Philly for that too. They're aggressive. Defensive zone faceoff with 19 seconds left and Laviolette keeps Leighton on the bench. Man that was awesome. And if Chicago wants to win this series, they'll have to be aggressive when they're leading, not passive.

And by the way, both Pronger and Ben Eager received 10 minute penalties at the conclusion of regulation. I didn't see what happened, but I doubt there will be any disciplinary repercussions.

PS: Michael Jordan's people changed the skates on his statue from Reeboks to Nikes.