MORE OF THE SAME FROM BRUINS 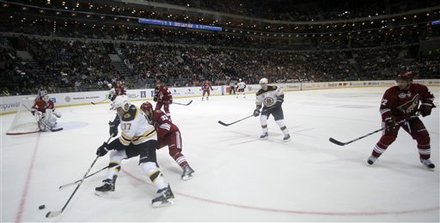 The weekend the Bruins had in Prague could have been used to sum up the entire 2009-10 season. And that's what worries me. They played uninspired, flat hockey. Then they were sparked, played hard, fought for loose pucks, made smart decisions, and outworked their opponent.

This routine repeated itself over and over last season. The B's would play three great games, then look lackadaisical for a pair of games, then reinvigorated for two more games, then listless for three, et cetera.

It even happens during the game itself. The Bruins consistently play their worst hockey when up by 3 goals. That's absurd. They get careless, they don't fight, they just try to cruise by until the clock hits 0:00. That doesn't work in hockey. And you'd think after what happened against Philadlephia last year, the Bruins wouldn't be so complacent when up 2-0 on Phoenix with 15 minutes of hockey left to play.

Rask was awful in Saturday's game. The Bruins played better in front of Thomas on Sunday, so Timmy was never put in the same unfortunate situations that Rask faced on Saturday. Then again, Rask put himself out of position far too often.

The power play unit was dreadful. When the Bruins had the man advantage, the Coyotes had better offensive opportunities. That problem needs to be immediately addressed. I like Hunwick out there. I don't like Blake Wheeler out there.

On the bright side, Nathan Horton looks phenomenal. And Seguin's poise and comfort during his breakaway goal was impressive.

So while at first I was satisfied with how the Bruins turned things around in their second game out there, I'm going to refrain from commending them for doing so. At least until they've put together a nice long streak of good efforts. I'm not expecting 82 games of playoff-level intensity. But lack-of-effort games like Saturday's should be rare and occasional. At the moment, it comprises half the season.

I'll have a very thorough (although late) season preview for the Bruins before their next game. Which is Saturday night in New Jersey.