WE SHOULD HAVE LOST 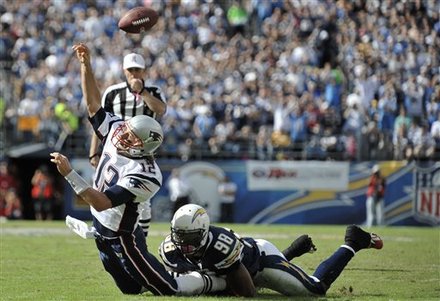 When was the last time the Patriots tried a quarterback sneak on 3rd/4th down, and failed? I can't remember the last time the QB sneak didn't work. So why is BJG Ellis running off tackle on a 4th and 1? I didn't mind the call to go for it, although I'd prefer a punt. But use the sneak, which has worked seemingly 100% of the time the last 10 years.

We'd all hoped that the Patriots' 4th quarter struggles were behind them. They dominated the 4th against Baltimore. But yesterday, the Pats were pathetic in the 4th.

The Pats made 5 trips to the Red Zone, and only scored 2 touchdowns. Inexcusable.

I'm not very excited about this team. They're showing the same offensive Red Zone struggles that plagued them in years past. The defense can't be relied on to win games. But it was the defense that won this game. They forced the turnovers, they kept San Diego to 20 points.

But the offense has to score in the Red Zone. They have to win the time of possession battle.

The Pats host the Vikings Sunday afternoon. Minnesota is 0-3 on the road, they have a turnover happy QB, a coach trying to control him, and a receiver that gives up on a potential TD catch because he's about to get hit.