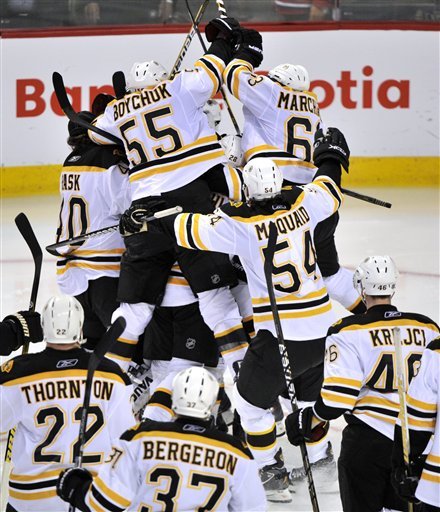 The Bruins spent the week in Lake Placid, NY. Then came out placidly last night, taking 30 minutes to properly wake up. During that time, Montreal unleashed 30 shots against Thomas and took a 3-1 lead. In the second half of the game, they beat Montreal 4-1. It was far from pretty. It was quite painful at times. But you had to love the ending.

I was fed up with Ryder being in the lineup. He hadn't contributed anything and I wanted Seguin to get a chance. I like being wrong sometimes. Ryder scored twice. His breakaway goal in the 2nd might have been more important than his OT winner, because it kept Montreal from pulling too far away.

For both his goals, Ryder was beautifully set-up by his teammates. Kaberle made himself useful and found Ryder with a zone stretching pass to trigger his breakaway. And linemates Chris Kelly and Rich Peverley ground out the possession that resulted in Ryder's second score.

Kelly now has 2 goals, 2 assists, and is +3 in this series. He's the type of guy that randomly has a huge impact in the playoffs. He's accustomed to physical play, he's an adept penalty killer, and he's always involved.

But give Ryder credit for the quality of his shots. His first goal was a snipe over Price's glovehand. His second shot came after he hesitated a fraction of a second. Price stretched his legs wide to get to the post, opening up the hole that Ryder shot through. 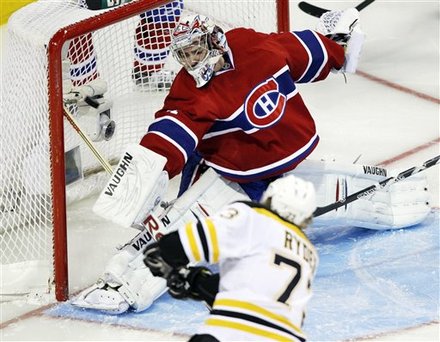 Bergeron continues to be the best Bruins' skater in this series. 5 points so far. Another great night in Game 4.

Andrew Ference is the type of guy who can decide a series for you. He can be that bad, and be that good. We've seen him make boneheaded mistakes, and brilliant plays. From shift to shift, the Bruins' fortunes have turned based on what guys like him have done. Last night he took a few hits to move the puck, then wound up in the high slot, and blasted a bullet past Price.

The PK unit may have allowed a goal, but they were excellent in their one kill of the game. Montreal had a golden opportunity to win it late in regulation, thanks to an iffy interference call on Seidenberg. But the PK was intelligently aggressive. Chris Kelly again having an impact.

I'm still waiting for the first line to show up. Lucic, Krejci, and Horton have combined for 2 goals, 0 assists, and are each -2 in this series. Last night, Krejci deked himself out of an unbelievable scoring chance. It was actually three chances in one play, and he messed up all of them. He could have one-timed at a half-empty net, instead he curled toward the crease. He could have forehanded a shot between Price's widely stretched legs, instead he went to the backhand. He could've backhanded a shot over Price's legpads, instead he lost control of the puck.

Then there's Lucic, who looked half-dead on most his shifts. When he did skate, he was electrifying. But for the most part he's still drifting around, barely noticeable on the ice. He played about 17 minutes last night. Do you believe that? How often did you notice he was out there?

So now it's a best-of-three series. The B's need to protect their house. They need to do something on the Power Play. The first line needs to score, or at least grind out good possessions. Guys like Bergeron and Kelly need to continue their good play. And Chara needs to bring his physical game. It doesn't get easier from here.

Photo Credits:
AP Photo
Posted by rob at 9:30 AM