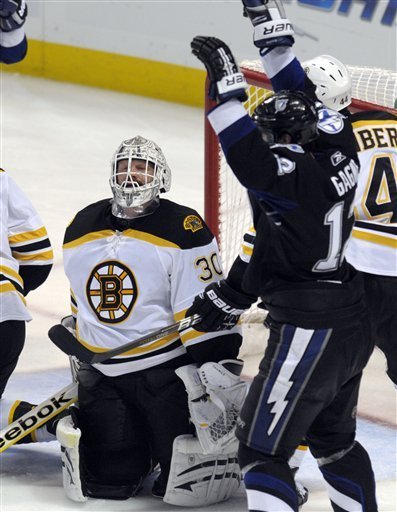 It's a game of mistakes. Tomas Kaberle is a 6' 1" 198 pound mistake. I don't know much about the Czech language, but I'm pretty sure that their word for mistake is "Kaberle." And at this point, it might be a mistake to even dress him for Game 5.

Every goal, except maybe Tampa Bay's empty-netter, in this game was the result of a mistake. Victor Hedman forgets that Patrice Bergeron is on the ice, and it's 1-0 Bruins. Chris Kelly forces a Neutral Zone turnover, Michael Ryder knocks a puck toward goal, it deflects off a Tampa stick and it's 2-0. Then shorthanded, Stamkos gives up the puck to Bergeron, and he scores a soft shortie that forces Roloson out of the game. 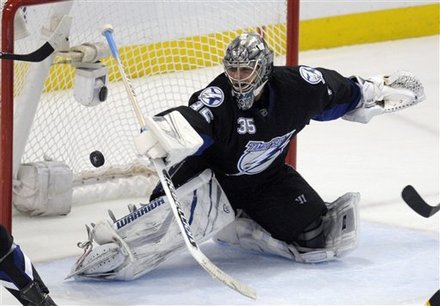 Just a sidenote on Victor Hedman: He's looked awful in this series and the Bruins should attack him like his name were Wideman. The NBC announcers were talking him up, saying that he'd gained a "reputation" for "playing well in big games." The kid's 20 years old, and this is his first tour in the playoffs. Reputations have to be earned with a little more than that. Moreover, he doesn't deserve those digits. #77 belongs to defensemen who don't make game-changing mistakes and aren't liabilities, son.

So the Bruins were up 3-0 despite not looking that good on offense. If they just played the same quality of defense, and took care of the puck like they did in Game 3, then it was in the bag.

But the 2nd period was a thorough demonstration of the Bruins' shortcomings in the 2010-11 season. The Power Play failed utterly. The Bruins look better 5-on-5 than they do 5-on-4. And I think it's because even when it's 5-on-4, the Lightning are the superior open ice team. On the Power Play, the Bruins got away from the boards, and consequently didn't even put pressure on the Lightning.

Just one Bruins Power Play goal makes it a 4-0 game and drains all of Tampa's energy.

Then the mistakes came. Tim Thomas started the festivities when he hesitated with the puck behind the net. A bit of miscommunication with Chara, then suddenly two Lightning were upon him, and Teddy Purcell scored. Blame Thomas for that one.

Then Michael Ryder got a little bit zealous in the Neutral Zone. He dove for a puck that was well beyond his reach. The result was a Tampa Bay 3-on-2. My complaint with Ryder's play is that he risked too much for such a minuscule reward. He risked a 3-on-2 breakaway (against a team built for 3-on-2 breakaways), in order to gain maybe a few seconds of Offensive Zone time, maybe a token shot, and a 1 in 100 chance of a goal.

The Bruins defended the 3-on-2 well, but had to collapse to their net to do so. Even Seguin blocked a shot next to the post. This opened up space and allowed Purcell enough room to adjust his shooting angle ever so slightly, and beat Thomas to the high side.

The third Tampa Bay goal was truly a Bruins team effort from a pair of countrymen. It started with David Krejci, who carried the puck into the Offensive Zone. He was surrounded against the boards by a pair of Lightning. Then he decided that since he was in danger, the best thing to do was to take the puck to an even more dangerous location. He moved back to the blue-line, then tried a pass. The pass was intercepted, with tragic results.

The impact of a giveaway depends on where it happens on the ice. Give the puck away behind the opponent's net, and not much bad can directly occur from that turnover. But give it away on your offensive blue-line, and much pain will follow. Because not only is it a dangerous location, not only are your defensemen thinking offense (or changing out), but you're giving the puck to the opponents' forwards.

So Krejci's little expedition back to the blue-line was absolutely moronic. And for someone renowned for his puckhandling, his "Hockey IQ," his and awareness, it was inexcusable.

Tomas Kaberle made sure that Krejci paid for his mistake. Sean Bergenheim completely bitched Kaberle behind the net. Bergenheim is about the same size as Kaberle, but Kaberle was in far better position to at least move the puck away. Still, Kaberle was manhandled by a man his own size. David Krejci offered little support. Then Bergenheim beat Thomas.

Tampa's winning goal came when Lucic inexplicably passed the puck to center ice in the Neutral Zone when he had an open lane of ice in front of him. It was intercepted by Ryan Malone, who passed it to Gagne, who scored.

The whole game was mistakes, miscues, errors, and brain farts. The Bruins were given a gift of 3 goals, then decided to re-gift the same to the Lightning. But that wasn't enough, so they gave Tampa one more.

Oh, and thank goodness Julien didn't waste his timeout in the 2nd, when Tampa scored twice in two minutes. It's a good thing Julien got to use it when... Well he didn't use it, but at least he can save it for Game 4... Well, he can't.

The series is 2-2 coming back to Boston. But I feel as though the Bruins gave Tampa a win in Game 4. This could/should be a 3-1 series if not for unforced errors.