BRUINS WIN IT THEIR WAY 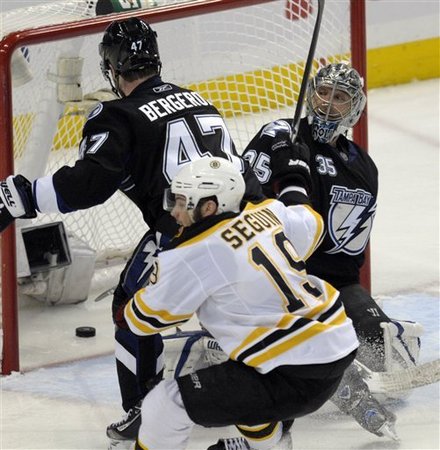 In Game 2, the Bruins beat the Lightning at their own game. It was wide open, up and down, fast-paced hockey played in the middle areas of the ice. Game 3 was played against the boards. It was played from zone to zone, a little slower, a lot tougher. This is the type of game the Bruins are built to win. Game 2 was a toss-up, even a loss, if not for Seguin. But last night's game had a black and gold stamp all over it.

The B's played their game well in all three zones. They cycled the puck in the offensive zone, didn't take shots unless they had a shooting lane (the Lightning only blocked 9 shots). They were patient. They kept the puck near the boards where they'd have the advantage. So even when Tampa won the puck back, they had to expend all their energy just to get it. Most importantly, the B's extended their posessions.

A defensive miscue resulted in Krejci's goal in the 1st. Victor Hedman got a bit too eager to help his teammate against Lucic. Krejci wisely stayed in the slot and collected the easy goal. It was also a hyper-aware pass from Lucic.

In the neutral zone, they slowed Tampa down just enough to prevent breakaways from turning deadly. What really helped was not turning the puck over in dangerous spots. The Bruins got the puck in deep to the offensive zone, and even when Tampa collected it, the B's were able to fill the neutral zone with bodies to slow down the Lightning just enough.

And the Bruins controlled the defensive zone. Thomas didn't have to face many second chance shots because defensemen pounced on loose pucks. There were some heart-pounding moments, but considering how good Tampa is, the Bruins did one hell of a good job in their own zone.

The return of Bergeron was huge. He won over 64% of his faceoffs, which mostly came against faceoff expert Lecavalier. And he was his excellent defensive self. He didn't look or play any differently. 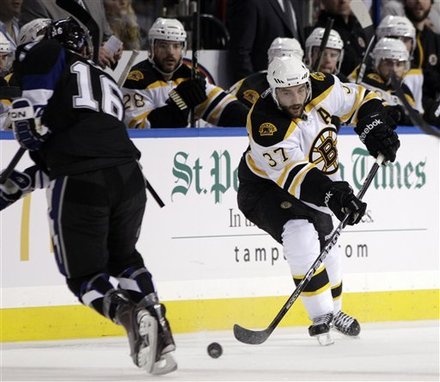 Ference and Boychuk continue to play well, supporting Chara and Seidenberg very nicely. The first line is clicking. Krejci's goal was his 4th game-winner of the playoffs, tying Cam Neely's Bruins' playoff record. Seguin didn't have breakaway chances, but he did the little things. His assist on Ference's goal was simple fundamental hockey: keeping a play alive in the offensive zone, continuing the cycle.

The Power Play struggled with entry. And the Bruins were offsides too often. That's about all there is to gripe about from this game. All and all, it played out exactly as you'd draw it up.

PS: What is up with Guy Boucher's scar? I did some legitimate research and couldn't find an answer. Boucher says it's not hockey related, but also said he hasn't even told his family where it's from. I don't like to make fun of people for scars and/or deformities, but when they keep the mystery alive by being all shifty about it, it peaks my curiosity. My guess is that it was a second mouth that's been sewn shut.