NOT SO SPECIAL TEAMS 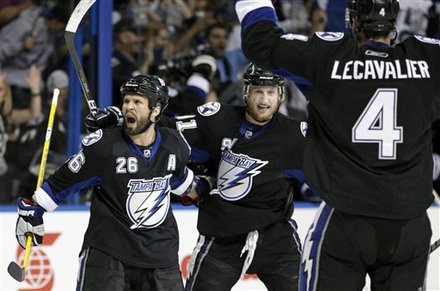 So many playoff games seem "stolen." Games are so closely fought, every inch contested. The smallest edge can be the difference in a shift, a period, a game, and ultimately a series. Tim Thomas' goaltending stole Game 5 for the Bruins. Tampa Bay's special teams "stole" Game 6.

Give credit to the Lightning for having excellent special teams. Give credit to the ref for that interference call on Peverley, which was a play I've seen go uncalled several hundred times this postseason. Give credit to some poor Penalty Killing before Teddy Purcell's goal, as all 4 Bruins committed to a battle below the goal-line.

I do like how the Bruins played in the 3rd period. They were frenzied. If not for that late breakaway goal (which was partially Boychuk's fault as he made an unwise pinch), the game goes to OT. Krejci wound up with a hat-trick, the first playoff hat-trick for a Bruin since Neely did it in '91. And the 3rd period reminded Dwayne Roloson that the Bruins have his number.

One silver-lining to this game is that the Bruins were nowhere near at their best, yet they were only a few plays away from winning. They didn't value the puck, they didn't make plays, they committed some silly penalties, like Ference's cross-check on Stamkos. But they were still close to victory.

Why is it that Michael Ryder's quality of play deteriorates, and Tyler Seguin pays for it by seeing his ice-time curtailed (fancy word for reduced)? Why is it that Kaberle continues to get so much ice-time, especially on the Power Play? Maybe he's the problem with that unit. The Power Play has been awful since he was acquired. Yet we see him out there every time.

Kaberle truly is a Toronto Maple Leaf. He's a moderately talented guy that disappoints when it matters. He's a regular season player whose reputation far outweighs his actual worth. I'm tempted to kidnap him for Game 7, Celtic Price style, just to ensure that Julien can't play him for 19:46 like he did last night. Game 7 is Friday night. The Bruins need every player to bring their absolute best game. Ryder needs to stop trying to handle the puck through 4 guys. Recchi needs to contribute. Kaberle needs to get kidnapped. To be honest, this is the Bruins' game to lose. Would you rather have Tim Thomas or Dwayne Roloson start between the pipes in Game 7? Would you rather have Chara-Seidenberg or Hedman-Brewer? Would you rather be the best 5-on-5 or on special teams?