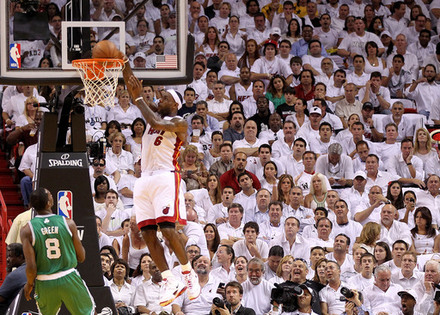 It was probably unfair that here in Boston LeBron once had a reputation as a poor playoff performer. Last year he ran into the Celtics' defense, who held him to 26.8 points per game in the series, which is hardly shameful. He had no supporting cast. Until now. And as detestable as he is, you have to give him and the Heat credit.

I just think Miami is more talented than the Celtics. Which doesn't mean they'll walk away with this series. But it does mean that the C's have to play their absolute best every night. They need to put the youthful, inexperienced Heat into tough situations. The C's swept the Knicks despite never dominating them, because they were much better in the last 60 seconds of close games. During the regular season, the Celtics beat the Heat by being better at the end of close games.

Ray Allen was 2 for 7, which is a bad percentage, and not nearly enough shots. He's been the driving force of the Celtics offense. If he's not getting shots, let alone hitting them, the Celtics have an uphill struggle. And likely won't win.

Last night was Rajon Rondo (20 points, 12 assists) vs. the Heat. And the Heat were better. Pierce was absent, KG was just OK, and while Jeff Green scored 11 off the bench, the Celtics are missing Perk's defense.

The C's need to step up at home. Allen needs to get open. Pierce and Garnett need to wake up. They need to keep things close at the end. Put some heat on the Heat. Miami struggled to close out tight games this year. They don't know where to send the ball, which one of their stars should get the key shot. The Celtics, on the other hand, distribute it with ease in those clutch moments.

I think the C's will win Game 3 and make this an interesting series. Game 3 is a long ways away, Saturday night at the Garden.