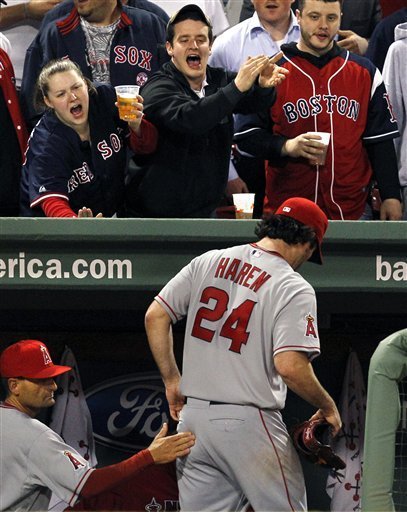 The Red Sox own the Angels. The Sox are now 14-15 overall, and more than a third (5) of those wins have come against Anaheim. And I'll take that. Because wins are at a premium right now.

Another Quality Start from Lester, his 6th straight. He's just so solid that it's unreal. Pretty much every start, he'll give the a team a good chance to win.

Crawford is finally hitting. That average of his is up to .194, close to the Mendoza line, close to his weight (215). The Sox finally hit some homeruns. Gonzales got his long-awaited 2nd homer, and that's a big relief. Ortiz got his second in 2 days, and Scutaro hit his first of the season.

Unfortunately, the Sox only have 2 more games against Anaheim this season, both this week. And until they consistently win games against teams that aren't the Angels or Blue Jays, I'm not going to fully believe that they've turned any corners. They're 8-1 against the Angels and Jays. 6-14 against everyone else.