THE BRUINS: LOOKING AHEAD 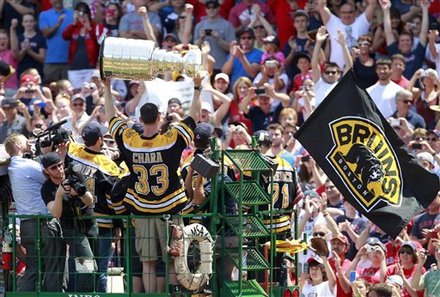 The joyful exuberance doesn't have to stop, but as the hockey games have stopped, we can look forward to next season. And there's quite a bit to look forward to. The core group of guys will return. In other words, Tim Thomas will return. Will he duplicate his awe-inspiring performance from this past season? That might be tough. There's no reason to think that he won't be close to it, though, and I'd bet on him having at least one more top quality year left.

Chara, Seidenberg, Ference, Boychuk, and Mcquaid all return. Thankfully. And Tomas Kaberle is an unrestricted free agent. Thankfully. I doubt the Bruins will make any efforts to keep him here. The defense is the strongest part of this team, apart from Thomas. The Bruins don't need to improve much here. The whole idea of a "puck-moving defenseman" has always bugged me. Offense comes from forwards, defensemen can contribute to that, but it shouldn't cost them defensively. I like defensive defensemen that can also play the puck.

I wouldn't mind Kampfer being the #6 defenseman, but I imagine the Bruins will bring in a more experienced hand. And it probably won't be a big name, or a "puck mover."

In the forwards department, the Bruins will likely say goodbye to Michael Ryder. Although he sporadically provided memorable playoff moments, his lack of consistency has been the one consistent part of his career. Mark Recchi is also gone, going out with ring #3.

The top line of Krejci-Lucic-Horton should remain intact. The word from Horton's camp is that he's not experiencing any post-concussion symptoms. So let's be optimistic and assume that this line returns.

Marchand and Bergeron are on the 2nd line and will need a winger. Peverley is the ultimate utility guy and can slot in there. But I'd rather have Peverley on a grinding 3rd line with guys like Chris Kelly.

The Bruins have some cap room available. They have $52.2 million committed to players, and the cap will be $64.3. So that's $11.1 million they'll be able to commit to filling the few roster holes they have. There might be more, depending on what happens with Savard.

I'd like to see them acquire Erik Cole, who is a free agent. Every time the B's play the Hurricanes, Cole impresses me. He's a hard player, he can score (26 goals last year, 184 in his career), and he plays the power play. He's solid. He'll turn 33 in November. He's not a game changer by himself, but I think if he's on a line with Marchand and Bergeron, all three of them become very good players.

The 4th line of Paille, Campbell, and Thornton is a sturdy group, with Paille and Campbell providing invaluable PK minutes. And we all know what Thornton can bring.

I'd like to see Seguin start the year in the AHL, getting plenty of ice time to learn the NHL style of play. I also wouldn't mind him being on the 3rd line with Peverley and Kelly.

Brooks Laich might be the best free agent that the Bruins look at. He can play wing, and he can turn that power play around. I personally think Cole, at a lower price, is a better value.

As we saw in the playoffs, the game isn't played on paper. For the Bruins to repeat, they need the same quality defense and goaltending. They could use a more potent offense, so long as it doesn't lose it's physicality. Scorers get cold. Forecheckers don't.

Iginla's team didn't even make the playoffs. Perry's was out after Round 1. Stamkos made the East finals, we know about Sedin and Kesler. That's a wide range of team results from these 5 guys. Having elite scoring threats is nice, but they can get cold, they can get shut down. Relying on offensive production isn't enough. The Bruins need to improve by adding grinders who can also score.
Posted by rob at 10:00 AM