SO CLOSE, BUT STILL SO FAR AWAY 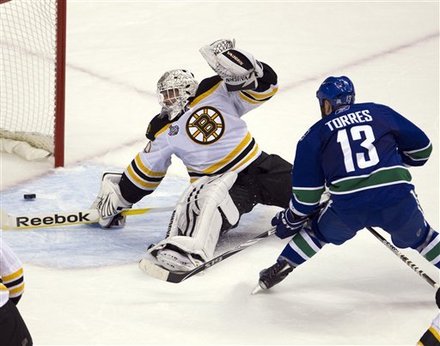 As heart wrenching as last night's loss was, I'm actually fairly optimistic. The Bruins went toe to toe with their opponent, and barely lost. The one goal they allowed was barely onside. Defensively, you can't expect much better from the Bruins.

The offense, on the other hand...

Let's start with the power play. I'm not a big fan of Chara playing in the crease. Even when a puck comes his way, the simple physics of his large stick make it difficult for him to get to it. A forward who's accustomed to playing down low, who has a shorter, quicker stick, would be better suited for that role.

Plus, Chara wins the hardest shot competition every year. Why are we waisting that rocket slapshot? He scored 14 goals this year, 8 on the PP, and all of those came from the point or when he'd rotate down from the point. Not from inside the crease.

Another problem is Kaberle. He's simply not contributing to the Power Play. His passes are bland. He's not a shooter. And when he does get clever, it's too clever, and often results in a turnover.

In the 1st period, the Bruins' Power Play was able to get shots on Luongo. But all the shots came from Kaberle, Seidenberg, and Krejci. These guys are not scorers. 23 total goals scored by this trio. A shot on goal is never a bad play, but these guys simply aren't going to score. Yet all of them are on the ice at the same time, and they're the only ones getting shots on net.

And when you put Chara in the crease, that's 3 defensemen on the ice, one of them never scores (Kaberle) plus a forward who only scores when he's set up by other forwards (Krejci), it's not an equation that will result in many goals.

The Bruins beat the Lightning by grinding for 60 minutes, and waiting for Tampa Bay to make a mistake. The Canucks aren't going to make mistakes. The B's are going to have to make their own luck against them.

But I'm optimistic. The Bruins have recovered well from tough losses in this postseason. Thomas gets an extra day off to recuperate from his stellar performance. The NHL gets an extra day to decide if Alexandre Burrows is a zombie or a vampire.

I think it takes a lot to be suspended in the Stanley Cup Finals, but grabbing hold of an opponents arm, jamming their finger in your mouth, then chomping down warrants at least a 1 game suspension. It's just too weird.

And I wasn't crying over Dan Hamhuis not being able to return to the game. His hit on Lucic was within the rules, but a hipcheck to the knee area is kind of sketchy. I was glad to see Krejci stick up for his teammate. 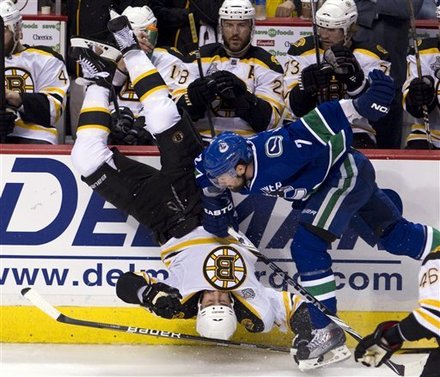 I'm also sick of the Roberto Luongo talk. He hasn't gotten the respect that other goalies get because of an inconsistent playoff record, because he whines if he doesn't get to start 70+ games, because he's a prima donna and a baby. He's a Quebecois goalie that plays for a team north of the border, he gets plenty of respect already.