THERE WILL BE SEVEN 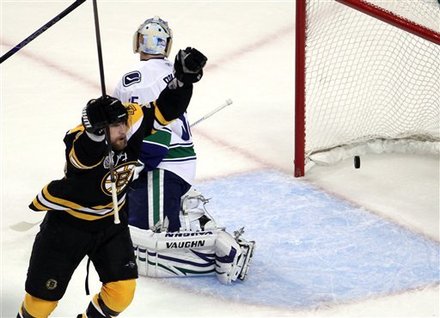 I wonder if Roberto Luongo will have any more critiques for Tim Thomas. I have my doubts. The cocksure goaltender didn't even last a period, and I have to say that each goal he allowed was pretty unforgivable for a goalie. You won't hear Thomas say that, because he respects the camaraderie that goalies share. But I don't have such scruples. Luongo sucked, the Bruins took advantage, and now the series is tied 3-3.

Tim Thomas deserves the Conn Smythe right now. Who else could win it?

But that being said, Roberto Luongo has had the biggest impact on this series. When he performs adequately, the Canucks win. When he doesn't, they lose. He's controlled this duel from Game 1, much more than Thomas has, even though Thomas has by far been the better goalie.

I guess what I'm saying is that even if Luongo does well, the Bruins need to find a way to win. They need to get production from the Power Play, they need to take care of the puck. They're going to need to win a close game on the road to bring the Cup where it belongs to Boston. The hockey gods are not pleased with the diving of the Sedins, or the shenanigans of Burrows, or how pillow soft Lapierre is, or the dastardly hit by Rome. The hockey gods want the Cup in Boston. The Bruins need to appease the hockey gods, and win it.