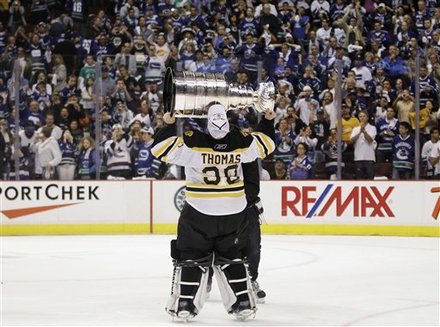 It didn't truly feel real until I saw Tim Thomas holding the Conn Smythe trophy. I've seen Thomas before, many times. I've seen the Conn Smythe as well. But when I saw that man and that thing together in the same frame, that's when it fully hit me what had happened. 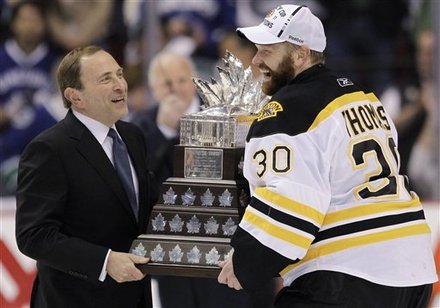 The Bruins are Champions. Not Adams Division Champs, not Conference Champs. They didn't win the Presiden't Trophy, they won the Stanley fucking Cup. For the first time since 1972. For only their 6th time in history (remember, for a few decades there were only 6 teams in the League). The redheaded stepchildren of Boston sports are now the center of the Hub.

It started and ended with Thomas. His Finals numbers were unreal. A 1.15 GAA, and a .967 SV%, with two shutouts. All this against the best offense in the NHL. Thomas' season will go down as one of the best in the history of his position. The kid from Michigan whose career bounced around from Vermont to Houston to Finland to Hamilton to Sweden to Detroit to Providence and finally to Boston. What a great story, what a great player.

Then the defense. How monstrous were Zdeno Chara and Dennis Seidenberg in the postseason? Chara was a +16 in the playoffs and a +5 in this series. That's against the best players in the League. Against the Sedins, against Stamkos and St. Louis. He was +16!

Every forward contributed at some point. Horton's big game-winners. Ryder had a few huge games. Seguin's breakaways. Marchand's introduction to the NHL as a grinder and a scorer. Bergeron, Recchi, everyone had at least one big, vital performance in one game. And guys like Marchand and Peverley seemed to repeatedly come through in the clutch. 11 playoff goals for Marchand. 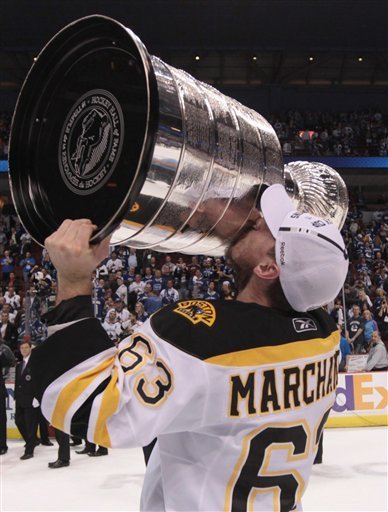 The same goes for defensemen like Boychuk, Ference, and McQuaid. Kaberle's biggest contribution was probably holding the Cup while his teammates drank from it. But who cares?

This is just a surreal feeling. This wasn't supposed to happen, right? Even when every other team in Boston was winning, the B's were lousy. They were the butts of jokes. They were the ones who couldn't get it done. And now they're part of the club, part of the best decade for any city in the history of sports.

On June 16, 2001, the Red Sox were on their way to another 2nd place season behind the Yankees. The Patriots had just used the 6th overall pick to draft Richard Seymour, and were hoping to recover from a 5-11 season under 2nd year head coach Bill Belichick. The Celtics were reeling from a 36-46 season that saw the departure of Rick Pitino. Boston sports were in a dark period.

Now look at where we are on June 16, 2011. We're preparing for another parade. Our Police Department has more experience in controlling Championship rioting than any other in the country. The longest active title drought belongs to the Patriots, who haven't won since all the way back in 2004. What a time to be from Boston. 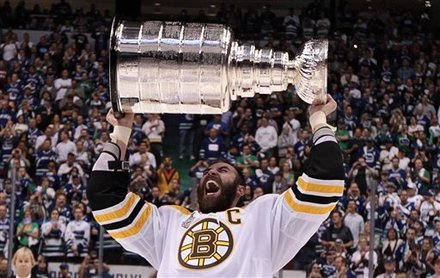