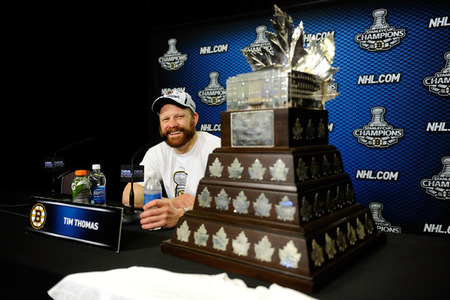 Two nights ago, Tim Thomas added two impressive pieces of hardware to an already diverse collection of trophies and awards. And while the Conn Smythe, the Stanley Cup, and his inevitable second Vezina are the feature pieces of his trophy case, the rest of what's in there tells the story of his career.

He's got some college hockey honors. He was two time All-ECAC and two time All NCAA East All-American. He also has some less traditional, and more difficult to spell awards under his belt.

In 1998, he won the Urpo Ylönen trophy, given to the best goalie in Finland's SM-liiga. He's the only American who has one of those bad boys. His team also won the very large Kanada-malja ("Canada Cup"), Finland's championship trophy.

In 2005 he won the Kultainen kypärä ("Golden Helmet") in Finland, awarded to the best player as voted by his fellow players. He won another 'best player' award that year: the Lasse Oksanen trophy.

The variety of awards he has in that trophy case don't just testify to his quality as a player. They're not just achievements. They're milestones on a career that took one of the most unique paths from obscurity to greatness. Nobody in the world has an Urpo Ylönen, a Vezina, and a Conn Smythe.
Posted by rob at 10:30 AM