LET'S GET BEDARDED IN HERE 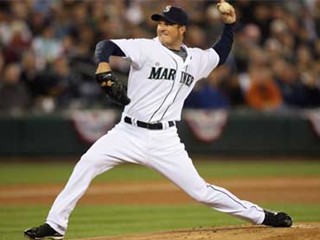 How long before we start seeing "Can't Spell Erik Without a 'K'" T-shirts?

After the Rich Harden deal fell apart due to concerns over his health, the Sox went after another Canadian born pitcher. As part of a three team deal, they acquired Erik Bedard. They dealt C Tim Federowicz, RHP Juan Rodriguez and RHP Stephen Fife to the Dodgers in exchange for minor leaguers OF Trayvon Robinson and OF Chih-Hsien Chiang. The Sox then sent Robinson and Chiang to Seattle for Bedard. Righty Josh Fields was packaged along with Bedard.

Fields was drafted by Seattle with the 20th overall pick of the 2008 draft. He's a 25 year old reliever just promoted from AA to AAA Tacoma.

Bedard is obviously the main event of the deal. The Sox need pitching to fill out their rotation. Buchholz was just placed on the 60 Day DL and his recovery has hit some roadblocks.

Bedard's been plagued by injury problems the past few years. He hasn't tossed a full season of work since 2007. He hasn't even thrown 100+ innings since 2007. He missed the entire 2010 season. And he was sidelines for a month with a sprained left knee. He made his return to Seattle's rotation Friday night, struggling through 1.1 innings and allowing 5 runs.

However, when healthy, he is a legitimate frontline starter. On the season, he has a 4-7 record (remember, this is Seattle, who have saddled Felix Hernandez with a 9-9 record) and a 3.45 ERA. But those numbers don't tell the whole story. He struggled in April, starting the season 0-4 with a 7.71 ERA. Since April 27th, he's gone 4-3 with a 2.34 ERA. That ERA includes his 1.1 inning, 5 run debacle on Friday.

Nine of his last 11 starts have been Quality Starts.

This is a good move. Bedard may end of on the DL by early September, but if he doesn't... Well, he's not just an upgrade over Andrew Miller. He solidifies the top of the Red Sox rotation.

His first start is slated to be Friday night against the Yankees. Welcome to Boston, Mr. Bedard.
Posted by rob at 9:30 AM