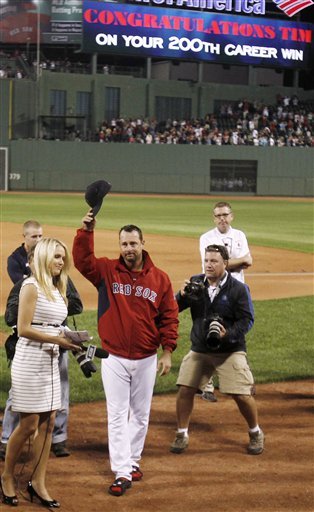 If you're not from around here, you might not get why Tim Wakefield's 200th career win is such a big deal for Sox fans. Wakefield's been with this team since 1995. That was when Roger Clemens, Aaron Sele, Jeff Suppan, Mo Vaughn, Mike Greenwell and Jose Conseco were on the team. Wakefield helped that team win the AL East with a 16-8 record.

After '95, the Sox entered one of the darkest periods in their recent history. Clemens went to Toronto, and suddenly returned to greatness. We saw the Yankees win the World Series, with Wade Boggs. And to be blunt, Tim Wakefield was a big part of that mediocrity.

My two biggest memories of Tim Wakefield are when he was on the mount when Aaron Boone hit his homerun in 2003, and it was Wakefield who pitched 3.1 innings of relief in Game 3 of the '04 ALCS, which saw the Yankees win 19-8, and Wakefield allow 5 runs.

But at least he ate those innings, saving the bullpen and preserving it for the marathon Games 4 and 5 that followed.

And you know what, nobody pitching in Major League Baseball today has more wins than him.

Last night's win was much needed for the Sox. Ellsbury continues to sizzle, and Pedroia exploded out of his slump with 2 homers, 2 doubles, and 5 RBI. Unfortunately, Ortiz was a late scratch due to back spasms. The Sox simply cannot afford any more injuries so hopefully that's a minor issue.

John Lackey opposes Ricky Romero this afternoon. The Sox have been able to score against him this season, so hopefully the offense can carry Lackey to win #13.

Photo Credit:
AP Photo
Posted by rob at 9:30 AM