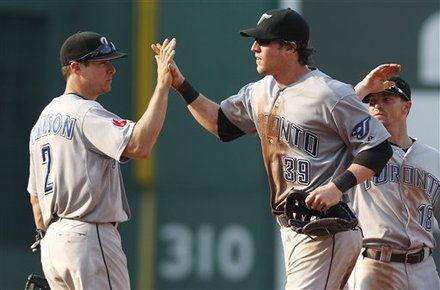 Remember when Daniel Bard was a strength and not a liability? It seems like ages ago. Three of his 5 blown saves have come in the last two weeks, which is doubly painful because wins are at a premium for the Sox lately, and he's literally blowing them away.

How often do you get a tolerable start from Lackey? How rare is it for him to give the Sox a chance to win? And Bard wasted it. The Sox got some nice timely hitting as well, enough to drive 4 runs in.

In a pennant race that's been heating up, it's a shame to waste wins like that.

And it better not continue this weekend. The Rays are 4 games behind in the Wild Card, and they come to Fenway for 4 games. A split would be huge for the Sox. A 4 game deficit with 14 games left is comfortable. But if the Sox lose 3, it's tight, and if they get swept, it's as tight as it can be.

Kyle Weiland vs. Jeremy Hellickson. These guys are 25 and 24 years old, respectively, and they're pitching in the middle of a pennant race. They'll have millions of Red Sox fans and a few dozen Rays fans watching their every move.