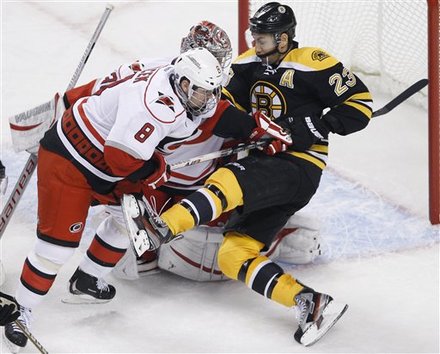 It's official. The Bruins are in their mid-season doldrums.

For the first time in the history of the Whalers/Hurricanes, they have swept their season series with the Boston Bruins. And that's unfortunate for the Bruins because the Canes are 14-25-9 against the rest of the NHL and 4-0 against the Bruins.

They're not playing physical. And I don't mean big hits and fights. I mean going into the corner for a puck and physically earning it from your opponent.

And when they do win battles, there's no puck support. Carolina's 2nd goal was scored after Marchand won a battle in the offensive zone. But it was a Hurricane that got to the loose puck and triggered a breakaway. Ference fumbling around for the puck didn't help much either.

The Bruins are in a 4-4-1 stretch and it's because of basic fundamentals. Turning the puck over. Winning battles. Puck support. Clearing the puck out of the zone. A team with less talent might be 2-7 in this stretch. But by the same token, the Bruins aren't talented enough to just show up and win. They need to execute the fundamentals, do the little things, and physically outmatch their opponents.

They haven't been doing that since that Vancouver game.