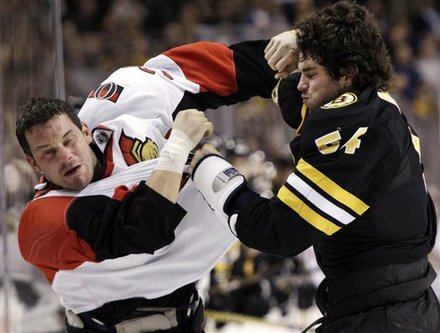 There was some speculation that Thomas wouldn't start last night. This speculation came from the same "experts" who concocted the Thomas trade rumors. They thought that the Bruins were so perturbed at Thomas' snub of Barack Obama that the B's would trade the reigning Vezina and Conny Smythe winner. It's amazing how much power a media fabricated story can think it has.

It would be ludicrous for the Bruins to trade Thomas, and silly of them to not put him in net last night, especially considering his 16-3 record against the Senators. Ottawa haven't beaten the Bruins since November 2010 and Thomas has been a key reason.

The Bruins won battles in the 3rd. They didn't turn the puck over. They once again conquered the final period, and that's been the key difference between them and all the other top Eastern Conference teams.

Bruins host the Hurricanes Thursday night. They're 0-3 against Carolina, so this could be a good test.