Bruins Claw Their Way Out of Carolina 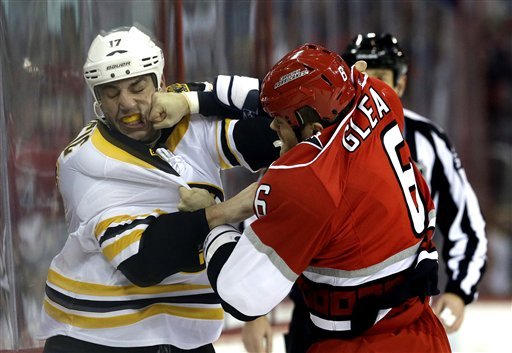 Special teams made the difference in this game. The Bruins killed all 6 of Carolina's power plays, and scored a shorthanded goal. The B's also scored 2 on their own power play (although 1 was an empty-netter). Zdeno Chara's power play goal wasn't scored by a scheme, it was scored by a talented player who did something creative

Was it me or did the puck seem extra bouncy? Both teams struggled to settle it. And almost every pass was just a bit off target. Puck possession was difficult for both teams to maintain. So I'm just going to forgive and forget all the times the Bruins turned the puck over.

Nathan Horton's goal was a beautiful thing to behold. He's going to become the keystone player on this team in the playoffs. Without the unique combination of scoring and physicality that he brings, that Krejci line will be ineffective. And we saw what can happen when that line is effective.

We've been spoiled by goalies in Boston. Rask and Thomas have alternated between back-up and starter, and both have been good enough to start. Now we have Anton Khudobin. He's talented, but inexperienced. He doesn't read the play very well. So his role on the team should be much more limited than we're accustomed to.

The B's host the Devils tonight.