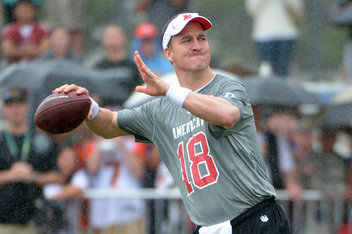 I love Hawaii. And I love the Pro Bowl. Hawaii is such a fun place, even though it's hard to spell. When me and all the other players got off the plane in Honolulu (what a fun word to say!), the guys started joking around with me. One of the pretty hula girls put those flower necklaces around my neck. J.J. Watt made everyone laugh when he said "Hey, Peyton finally got laid." I didn't get it, but I smiled. I like when people laugh with me. It makes me happy.

The game was fun, too. Coach Fox came along. I like Coach Fox for two reasons:

#1: His name reminds me of Coach Hayden Fox from Coach. I loved that show. Especially Dauber. He was silly. I wanted to play football at Minnesota State, but Pa made me go to Tennessee.

#2: His name also reminds me of one of my favorite movies when I was a teenager: The Fox and the Hound.

Every day at practice, I sniff my way up to Coach Fox, then howl. I want him to say "I'm a fox!" He just shakes his head, though. Oh well!

I still like him. He's not as nice as Coach Tony, but he's still nice.

Some of my old friends were at the Pro Bowl. Reggie was there. And so was Jeff! And my little "bro" Eli!!!

They let Jeff snap the ball to me one last time. It was nice. It's nice when TV and the League do nice things for me. They like me.

I told my old joke to Jeff that I used to tell him when we played together, that since he plays football he should change his name to Sunday! We chuckled. Jeff used to carry me through airport terminals if the walk from the plane to the bus was too long.

We lost the game, but I'm used to losing the last game of the year. People still gave me all sorts of compliments. Like they usually do.

Jeff and I went out for pizza. We invited Reggie, but all he did was send us a text saying "I'm too old for Chuckie Cheese."

We had a Hawaiian pizza, but it was yucky. So we sent it back and got pepperoni! And Jeff let me have the last slice.