Thankfully the Bruins Are Back 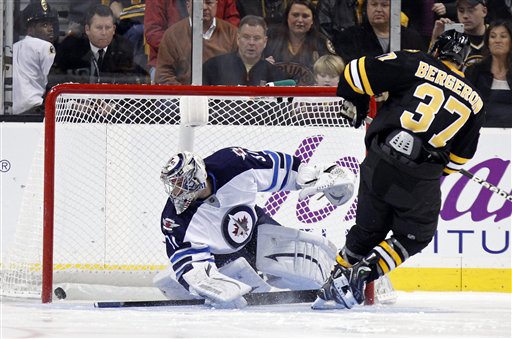 If the NHL were still locked out, then how miserable would this February be? I'm not a big fan of NBA basketball, and don't get into college basketball until March. Without hockey, the next few weeks would totally suck.

The Bruins have won both their games. And in this abbreviated season it's vital for teams to win and accumulate points early. There are only 46 games left. After one long weekend over 4% of the regular season is already over.

The B's look relatively sharp. That's partially because many players went to Europe. But I think it's mostly because this team is not very different from the team that played last year. Players don't need to get used to playing with new teammates. Most of this team has been playing together for a few years.

Tuukka Rask looks smooth. I've never been much of a Rask fan, but he's playing bigger, he's not retreating into the net, he's staying balanced, and moving from side to side with ease. Almost as good as Tim Thomas in his prime.

The Power Play still looks slow and predictable. The coaching staff can scheme up whatever they like, but the Bruins do not have the personnel to make for a truly effective Power Play. Although a healthy Nathan Horton can help change that.

The Bruins are in New York on Wednesday to play the Rangers.