Why I Hate Notre Dame 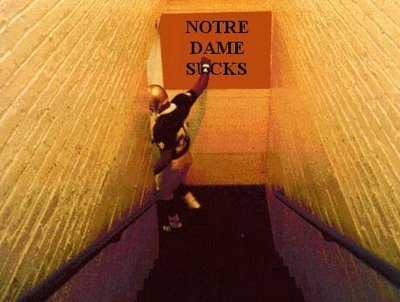 I hate Notre Dame. I hate the school, the team, the alumni, the lack of football conference affiliation, the logo, and just about everything that has anything to do with Notre Dame. Except Rudy. That movie gets me weepy every time. But apart from that, I despise everything related to Notre Dame.

Why? Because I'm Irish. I hate the notion that because one's family is of Irish descent, they should like some random football team in South Bend, Indiana. Why should Irish-Americans give their sporting allegiance to some school that has nothing to do with them? Just because their mascot is a racist caricature of a drunken, brawling, simian Irishman?

Why else should I hate Notre Dame? Well it's pretentious in sports. The whole "independent" thing rubs me the wrong way. Why not join a league and be part of a larger community? Or is Notre Dame too good, too superior to lower itself by joining a league?

And finally, this is a pet peeve of mine, but Notre Dame Stadium's sidelines are overly crowded with people. The sidelines are packed with different cheer groups, as well as fans, and people getting in the way of the players on the field. It's dangerous. But Notre Dame doesn't care. They're going to do things the Notre Dame way.

So I'm especially pleased that Alabama throttled Notre Dame. Crimson defeated Gold. Put the echoes to sleep. And so on. Roll Tide.