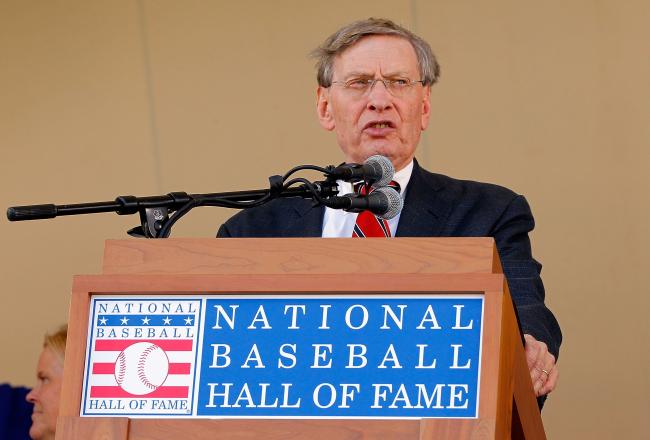 Firstly, how stupid is it to have an envelope-opening-ceremony when you know the envelope is empty? That was baseball at its most baseballiness yesterday. Just have a press conference and be done with it.

Now to the meat of the discussion. No player was voted into the Hall of Fame by the pompous BBWAA (Baseball Writers' Association of America). A slugger with 762 HRs, 514 steals, and 7 MVPs received 36.2% of the vote. A pitcher with 354 wins and 7 Cy Youngs received only 38.8% Why? Because of PEDs.

I hate Barry Bonds. And I can't wait to DVR Roger Clemens's funeral so I can watch it again and again, and have a chuckle anytime I want. But these guys were never caught, never convicted, and they were damn good players even before the likely start of their PED cycles. Bonds won the MVP 3 times from 1990 to 1993. Clemens won 3 of his Cy Youngs in Boston.

But no, in this issue full of grey area and complex questions, the BBWAA has taken a simple black and white stance. Suspicion=guilt. Even being surrounded by suspicious players means you're guilty. However the BBWAA isn't looking for justice. They simply want to punish the players who threatened the illusion that baseball is something special, something pure. This is about vengeance.

Documentarian Ken Burns made some remarks that clearly demonstrate the punitive attitudes of those who voted against Bonds and Clemens:

"We know some pitchers extended their playing careers, we know some people hit the ball farther... those motherfuckers should suffer for a while."

Suffer? Motherfuckers? These sound like the words of someone being interviewed outside a Court House, after some thugs were convicted of murdering his children. I can picture Samuel L. Jackson saying this, not Ken Burns.

He and the BBWAA have no right to mount such high horses. They were all complicit in the steroid era, particularly the BBWAA. The writers, whose job it is to find stories and write about them, somehow missed the biggest story in sports for well over a decade. They followed every movement of Mark McGwire and Sammy Sosa, and later Barry Bonds, and yet found nothing suspicious? They did no digging, they didn't look for anything to make Big Mac and Sosa look bad.

And when people did speculate or point out the rapid increase in homeruns, they were dismissed as cynics. And then writers talked about how tightly wound the ball was, and how that was making them fly out of the park at absurd rates. And the reason biceps were bursting was due to modern weight-training techniques and protein shakes. Every theory except for illegal PEDs was used to explain the ridiculous amount of homeruns being hit.

The BBWAA was willfully negligent, and they missed the story. Now, since they couldn't punish these players with words, they're punishing them with votes.

A friend of mine pointed out that the Hall of Fame is primarily a museum of the game's history. The writers want to rewrite the history (which they initially did not write about), and that's just wrong. The BBWAA should vote for people they don't like, vote for sluggers with muscles throbbing with HGH, vote for pitchers who extended their careers. It might hurt the BBWAA to do so, but to quote Ken Burns, those motherfuckers should suffer for a while.