Bruins Remember How to Win 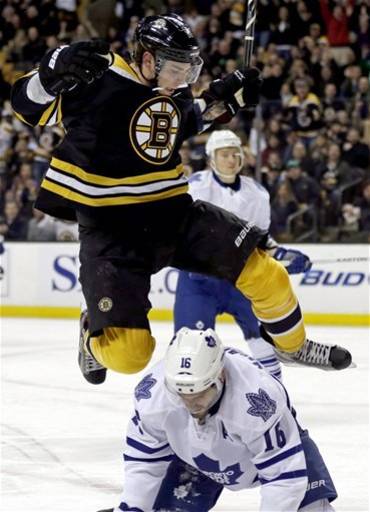 The B's have beaten Toronto 8 straight times. After the Bruins recent struggles, it was perfect timing to host the Maple Leafs. Toronto's been surprisingly good this season, but the Bruins still have their number.

And that number is 19. Only in hockey can 19 be greater than 81. The trade that sent Phil Kessel to Toronto brought a talented young forward and a talented young defenseman to Boston. And in games between the two clubs, Seguin plays much, much better than Kessel.

Earlier in the day, Claude Julien mentioned to the press that players like Chris Kelly and Rich Peverley are capable of playing better. Also, Chris Bourque was placed on waivers so he could be sent to the Providence Bruins. Without Bourque, the 3rd line looked better. They didn't make much of an impact on the game, but they did seem to be playing with more drive, more purpose.

The Power Play unit continues to struggle. And all the tricks and schemes the Bruins coaches try are not the solution to the problem. Putting 5 forwards and 1 defenseman is not the solution. Having Chara play the half-wall is not a solution. The problem with the PP unit isn't tactics, it's personnel.

There aren't enough shooters on the ice in Power Play situations. David Krejci and Rich Peverley are talented forwards, but they're not shooters. If you have 5 shooters on the ice, then the 4 penalty killers must respect the possibility of a shot. That opens passing lanes. The shooters don't have to be good shooters, just guys that are capable of firing one at the net at any time.

Taking a defenseman off the ice isn't the answer. The Bruins have sufficient blue-liners that can do their job on a Power Play. Chara and Hamilton are great PP defensemen. Seidenberg and Boychuk, who are not scorers, can at least shoot. The Bruins are already shallow on good PP forwards, why lose another one by putting him on the blue-line?

There needs to be more movement without the puck. Make it difficult for the penalty killers to cover their space and their lanes. I'm tired of seeing the Bruins execute static passing drills in the offensive zone when they have a man advantage.

Anyway, Anton Khudobin ain't too shabby, is he? He's got talent. Consistency is still an issue with him. He's a very good backup, though.

The Bruins host the Flyers Saturday afternoon. The Flyers have been Rasks's nemesis, so it will be interesting to see how he does.